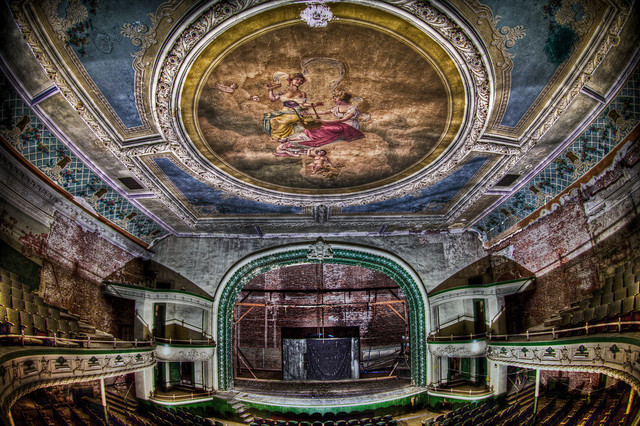 The Orpheum Theatre was part of a Beaux-Arts style building that was constructed by a French-Canadian Benevolent Organization known as Le Club des Francs-Tireurs (The French Sharpshooters Club).

The group hired fame New Bedford architect Louis Destremps to design this imposing building, which not only housed the beautiful Vaudeville and movie theatre, but also contained a grand ballroom, a prone-position shooting range, various offices and meeting spaces, a gymnasium and retail space on the lower level.

Construction began in 1910 and was finished in 1912. The Orpheum Theatre opened to large crowds on April 14, 1912. While the residents of New Bedford were lining up to see the evenings' opening act of the Five Musical Durands, the RMS Titanic was steaming toward her tragic end.

Throughout the decades, the theatre entertained the populace with Vaudeville, Films, newsreels and serials. The French Sharpshooters trained recruits in marksmanship for WWII in their rifle range. The grand ballroom held socials, dances, drill exhibitions, parties and wedding receptions.

The theatre originally had 1,500 seats, verified by the very first newspaper advertisements for the Orpheum Theatre. Over the years the original seats had been removed and had been replaced by more modern seats, which were then sold off, and the original seats were re-installed. Not all the seating was replaced and the seating capacity is now for around 1,200. The theatre space has a lower level, as well as a balcony and upper and lower box seats flanking the proscenium arch.

The Orpheum Theatre was closed in 1958-59. It opened sparodically after that for special events, but was eventually sold off by the French Sharpshoots Club and was later used as a warehouse by a tobacco and candy company. The building has been neglected and began to deteriorate due to lack of upkeep. The backside of the building now houses an ethnic supermarket, but the remainder of the public spaces continue to crumble.

O.R.P.H. Inc, or Orpheum Rising Project Helpers is a non-profit organization that is focused on securing and rehabilitating the Orpheum Theatre and French Sharpshooters Hall to its original grandeur, our effort is to make it a community theatre and multi-cultural center for the residents of New Bedford. Much work and funding will be needed to accomplish this.

You can learn more about the building and what it means to the citizens of New Bedford by visiting the website below.

There you will find a documentary that explains the history of both The French Sharpshoots Organization, as well as the magnificent Orpheum Theatre.

My father, Gilbert Hemenway, was a projectionist in New Bedford from the 1930s until 1956. He worked very briefly at the Orpheum in its last days. At that time it was not open full time… just like the New Bedford Theater which was only open during Summer vacation. I only went there once and my father let my mother, sister, and I into the club area, and we played pool.

His older brother Floyd trained him and another brother George at the Allen Theater, located on east side of Acushnet Avenue between Coffin Ave and Phillips Ave. My mother met him there when he was an usher and ticket taker. Just about the whole block burned down in 1940. His early years were at the Bailey Square and the Keith (Fairhaven). My memories are of him working the Capital, Empire, New Bedford, Dartmouth Drive-In, Fairhaven Drive-In, and in Fall River he worked the Plaza and the Embassy. He also worked the Newport Theater (RI) briefly. When the South Pacific tour came to the New Bedford Theater, he ran the spot light.

I posted some hilarious stories of what my father did while at the Plaza. http://cinematreasures.org/theater/12048/

In 1956 we moved to Los Angeles. In 1990, I visited the booth at the Fairhaven Drive-In and everything was still in place. I took the last carbons out of the Peerless carbon arc projector, the final movie run sheet, and the reel of film that they show at Intermission. I also took the ramp speaker that my father strung up along the ceiling to the amplifier when the place first opened. I still have and cherish them. With virtually all of these theaters gone, a piece of me is missing.

For those interested in help getting the New Bedford Orpheum Restoration project get underway, the next ORPH Inc. meeting is scheduled for this Thursday, June 2th.

“Our general meeting will table a few new fundraising ideas and will also go over some continuing business as well. There has been a lot going on and our efforts to keep this organization moving forward are ongoing and varied. There will be new business discussed, as well as updates on current affairs.

We do hope you can make it!"

That looks like it was a beautiful theatre, and it has tremendous potential. Here’s hoping that it’s all renovated and ready for use and enjoyment.

Help us celebrate a day in History ….

On April 15, 1912 as people in New Bedford were getting ready for the opening of the Orpheum Theatre, little did they realize that the famed steamship the “RMS Titanic” had struck an iceberg and sank taking along over 1,500 souls on that very same day.

But although the Titanic was lost, the Orpheum Theatre and French Sharpshooters’ Hall opened to large crowds. It was one of the jewels of area’s theaters. It was cherished for its entertainment by many of the local citizens for 46 years until it closed in 1958.

The organization O.R.P.H., INC. (Orpheum Rising Project Helpers) with support of the Community Building Mini-Grant Program of the United Way of Greater New Bedford invite the public to join us to celebrate this 100 year milestone and to highlight plans to save this historic landmark.

Get Lucky! There will also be a silent auction and raffle!

There will be entertainment along with memorabilia, photos, and documentary videos on the theater’s history.

O.R.P.H., INC. Mission Statement “To preserve, restore, protect and adapt the building known as the French Sharpshooters Hall and Orpheum Theatre located at 1005 Water Street in New Bedford, Massachusetts; to create and operate a multi-cultural arts facility, to promote arts, culture, diversity and education, to hold, organize and promote events for public participation; to manage the theater to the benefit of its stated purpose, and to do any and all acts permitted by a corporation organized under Chapter 180 of the General Laws of Massachusetts. 2004”

I just visited the Orpheums and read there history. They have an error by stating that it is the 2nd oldest Orpheum behind LA in the country. Well the Orpheum in Boston is much older. It was opened in 1852 as the Empire and in 1905 it became the Orpheum and it became a Lowes.

Sorry I put the above under the wrong city. It should have been Fall River.

ORPHEUM PHOTO, 1941, FROM MGM REPORTS Thanks to Theatre Historical Society of America.

What is current status,as all references to Orphic no longer operate.??