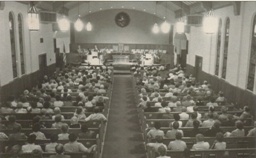 Located in the heart of downtown Fort Lauderdale, Cinema Paradiso’s most unique feature (aside from it’s content) is that it’s housed in a renovated church building. Dating back to the earlier half of the century, the building was constructed as the First Methodist Church of Fort Lauderdale. Once the church moved to a bigger location, the building went under the charge of the County, where it functions reportedly ranged from a family-counseling center to narcotics storage for the courthouse. In the mid-1980’s the building was retrofitted as a stage theater for use by the actress, director, and playwright Vinnette Carroll, the first African-American woman to direct a Broadway show, and became the Vinnette Carroll Theater.

In the late-1990’s, after Ms. Carroll fell ill and activity in the theater declined, the County handed management of the building over to the Broward County Film Society. A second renovation commenced, this time to fit the existing theater with film projection equipment. Around 2000, the movie theater opened as the Festival Arts Cinema, primarily used for the Fort Lauderdale International Film Festival. Eventually renamed Cinema Paradiso, in homage to the Oscar-winning film that featured a church turned movie house, the theater opened as a year-round art house cinema. A few years later the theater went through its third renovation, this time updating the projection and sound equipment, redoing the seating platform (eliminating the theater-in-the-round feature that wasn’t conductive to movie watching), installing plush velvet seats and cosmetically updating the theater and lobby.

Today the theater is still operated by the Broward County Film Society, functioning as it’s headquarters, and is featured predominantly during the annual Fort Lauderdale International Film Festival. The theater specializes in foreign, American independent and retrospective films, but also periodically holds live theater performances. It has even gone far back enough to its roots where it has hosted wedding services. It was renamed Savor Cinema in 2016.

Nice to see a movie theatre named after the famous Italian film, but the descripton has a factual error. In that film there was no “church turned movie house.” It was a Sicilian village cinema and presumably built as a cinema, unlike its Fort Lauderdale namesake. True, there is a priest who oversees the “censoring” of the films for the townspeople, until the place burns, a new owner takes over, and the priest has no more censorship privileges. But there is nothing in the screenplay about its ever having been a church.

This is not the first theater named after the film. There was a short lived Cinema Paradiso in Easton PA, located in an old Eric theater. It is listed in CT as the Marquis, the latest theater to occupy the space.

When the FLIFF announced its opening of this venue in 2000, my excitement could be contained only with great difficulty. The vogue of the “art cinema” in the tri-county area had been in decline for well over a decade, and the last remaining venues whose single screens were devoted exclusively to “art films” — the Alliance Cinema, the Astor Art Cinema, and the Absinthe House (nee Grove, then Alcazar) Cinematheque, and the very short-lived Mercury Theater, all in Miami-Dade — had begun to close, leaving only the major chains to book films in limited release. And even those bookings were of the most high-profile, commercially viable “art films.”

Unfortunately, the Cinema Paradiso has been a disappointment since its inception. At first, showing only 35mm presentations, the technical profile left much to be desired. Flimsy curtains allowed ample amounts of sunlight to leak in through this former church’s stained-glass windows, while bad acoustics and an inadequate sound system made audio muddy, distant, and often not audible. The screen itself was not properly masked, so regardless the aspect ratio, the image itself was always much smaller than the square footage of the screen.

In the eight or so years since it opened, Cinema Paradiso has much improved not only presentation, but also its aesthetic. The lobby and auditorium both boast a sort of pre-fab “luxuriousness” that feels consistent with the beach-baked brainlessness of the local culture. Sadly, while 35mm presentations now both look and sound mostly great (though the movable masking is still imperfect), they’re rare (rare as in, like, maybe no more than two a quarter). A few years ago, FLIFF partnered with the New York-based distribution company Emerging Pictures, whose business model is to take “small” films in limited release by other distributors and distribute them to less dependable markets, like South Florida, in a digital format. So, movies that are shot on 35mm and distributed in 35mm in places like New York, Chicago, Houston, Los Angeles, Boston, Seattle, etc, are electronically transmitted to venues like CP, who can cut costs by paying significantly less than they would for a print and the shipping of a print.

The funny thing is, CP often shows stuff digitally that has played in 35mm elsewhere in South Florida. Before the Devil Know You’re Dead, for instance, played digitally at CP while 35mm engagements continued at a few other Regal locations.

Digital projection, no matter how state of the art, cannot compare to 35mm. Furthermore, it’s my belief that, if something is shot on 35mm, it should be presented that way. Anything less is simply a cheat. Not only does CP present Emerging Pictures product, it also does arbitrary “retro” programming, all of which entails straight DVD projection, and the aspect ratio is often skewed (Casablanca, for instance, was once stretched out to 1.85:1, and Ingrid Bergman looked awfully fat).

A contact at Cinema Paradiso explained to me that they don’t have the revenue or the financial resources to continue showing 35mm presentations, yet attendance at this theater suggests otherwise. The flip-side, of course, is that the attendance also suggests that audiences (at least in South FL) either don’t care what format they’re shown, or can’t tell the difference.

So, CP has almost totally phased out 35mm projection which, in my view, relieves it from being a real movie theater, instead rendering it merely just a space in which people can see movies projected.

To say useing digital projection does not make you a theater is just silly. I USE BOTH AT MY THEATER 95 % FILM 5 % DIGITAL.Most Emerging theaters are not true digital but home theater projectors.

Again, I believe that if something’s native format is film, then on film is how it should be exhibited. If that ratio is accurate, then I wouldn’t dismiss your venue as a “non-theater.” Cinema Paradiso, on the other hand, exhibits 3% film and %97 digital, and their “retrospective” programming is all straight DVD projection, menu screen navigation and all.

And yes, there’s other Emerging venues in my area, and I don’t even browse their schedules. They’re as good as non-existent to me.

In the early 1960s we lived within walking distance when this was the First Methodist Church. I had good friends who were members, and as a young organist at that time, I substituted there one week, enjoying playing on the church’s Allen organ. I have very warm memories of that neighborhood overall, most especially the easy walking distance between home and the then-existing Florida and Warnor theaters and the then-lively and traditional downtown.

I haven’t been to the Cinema Paradiso, but an article about the film festival caught my attention and normally I’d certainly look forward to checking it out next time I’m in South Florida. What a disappointment, then, to read the above description of the state of things. Has there been any improvement in the past year?