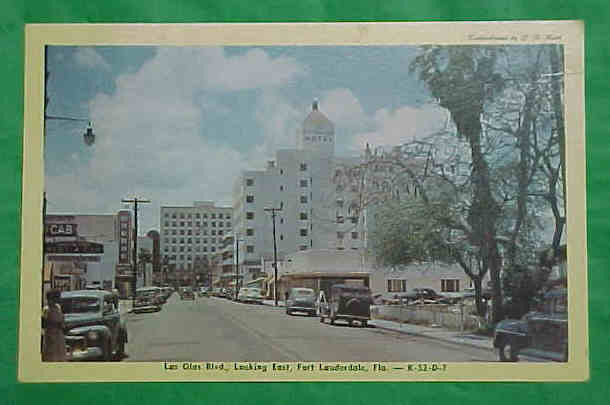 ChasSmith: Perhaps that may have been the case, but according to several sources, including some highly respectable architectural resources all state that the Warnor was closed in 1961, The Florida and the Colony ran until 1964. All buildings have since been demolished. One thing to note, most of the “blockbuster” films went to the much larger Florida theatre. The two latter films that you mention would certainly fit the blockbuster bill.

I show it still advertised in the Miami Herald in 1962, but not beyond that.

An April 26, 1941 issue of Boxoffice magazine announces the imminent opening of the Warnor to be followed shortly after by the Colony. Unless the war changed these plans, both theatres opened in 1941 and the Warnor never operated as the ‘Warner’.

Hadn’t revisited this in a while, but I’ve done some digging through the Miami News ads available through Google Newspapers, and have found that my memories were correct re the above two blockbusters playing at the Warnor as opposed to the Florida. “King of Kings” was there in March 1962, and “West Side Story” in March 1963.

I’d always known the latter had a long roadshow engagement beforehand, but was surprised at how long it took “King of Kings” to make the rounds; likewise, some other films from my early days in Fort Lauderdale. It sure wasn’t like it is now, with films opening everywhere at once. I may not have been aware of that then, but it appears we were waiting quite a long while for many films to get to local theaters.

Haven’t found the above-mentioned “Premature Burial” yet, but I’m making a load of other happy discoveries browsing those ads.

This question is a real long shot, I know… but in view of my confirming that “West Side Story” opened here following its roadshow engagement, and with all the current controversy over the about-to-be-released Blu-ray, does anyone know if the Warnor had 70mm capability…or know how to research that?

Florida State closed the Warnor on June 12, 1963 — and opened their new Coral Ridge Theater about four miles north the following day. “Duel of the Titans” with Steve Reeves appears to have been the Warnor’s final movie. The property was indeed sold to the Fort Lauderdale Daily News. (From searches of The Miami News/Google News)

Information on the Fort Lauderdale area theaters in those years is extremely welcome. Thank you, sporridge.

(Sure would LOVE to find some more pictures!)

Yesindeed. Always loved balconies, and I especially remember sitting up there at the Florida’s summer kids' matinees.

This opened on April 24th, 1941. Grand opening ad in the photo section.