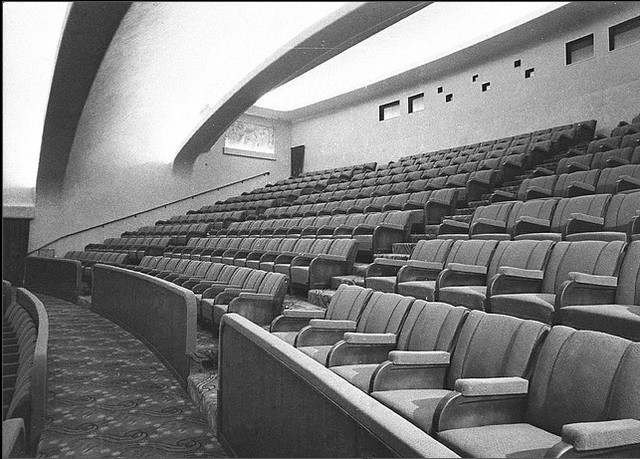 The Metro King’s Cross as it was generally known for the last 53 years was originally part of a live entertainment complex called the Minerva Centre. This consisted of the Minerva Theatre, The Minerva Café and Nightclub (later the 2KY radio studios) and Metro Chambers, an office and apartment building. They were all designed to sit harmoniously on blocks of land fronted by Macleay Street and continuing down Orwell Street in Sydney’s then cosmopolitan (today seedy) inner city area of Kings Cross.

The buildings were designed by architect C. Bruce Dellit in 1937, who had also been responsible for the Liberty Theatre in Pitt Street in the city. Building was executed by the architectural firm of Crick and Furse who most notably were responsible for the Kings circuit of theatres. Ground was broken in 1938 but due to unforeseen delays the Minerva Theatre did not open its doors until 31st March 1939. The fibrous plaster interior and decorative features being supervised by Dudley Ward. The whole exterior and interior design was in the clean Streamline Moderne style utilising various surface planes that were lit in imaginative ways. The street frontage was stepped with awnings, curved glass and a soaring vertical neon incorporated in a tower so that you were invited toward the glass entrance doors where you could see into the elegant lobby. The theatre exterior also featured several small shops and a kiosk (candy bar) facing the street originally all in various shades of pastel green.

The interior was sleek and sophisticated with plentiful use of frosted glass, chrome and mirror in the foyer/lobby area with a wide staircase at the far end inviting you up into the Dress Circle. Above the entrance doors was a photomural of the local area from the air. (Originally intended to be a painted mural by Australian artist Norman Lindsay). The interior of the auditorium was ribbed with plaster arches that stepped down toward the proscenium with neon trough lighting installed within. There were decorative murals in the upper circle and there was armchair seating throughout. The proscenium also featured side arches on either side that could be used to feature performers outside of the main stage. The stage was deep and incorporated full flying facilities and plentiful dressing rooms. There was an orchestra pit and the projection box contained all the necessary equipment for movies as well as providing accommodation for the follow spots and lighting board. There was no expense spared in building this beautiful theatre and it incorporated every possible modern feature as well as having perfect acoustics. The theatre was air-conditioned and carpeted throughout.

The Minerva Theatre opened with Robert Sherwood’s play “Idiots Delight” and live performances continued with some of the most famous names of Australian theatre featured in established international plays. By 1948 the theatre was having difficulty finding a large enough audience regularly and the owners sold it to MGM. Live plays continued until April 1950 when MGM refurbished the theatre and opened “The Forsythe Saga”. From then on the theatre opened films concurrently with MGM’s city theatres and was run to the same exacting standards finally becoming the Metro Kings X in 1952.

CinemaScope and Perspecta sound was installed in its wide proscenium in July 1954. The Metro occasionally featured premiere engagements of big films such as “Mary Poppins” and “Who’s Afraid of Virginia Woolf?” before reverting to stage use again in May 1969 with the Australian stage version of “Hair”. The theatre remained unaltered and stylishly modern. MGM sold the their entire Australian operation to Greater Union who continued live performances in tandem with the odd film revival. “Applause” and “Ginger Rogers Live on Stage” being two of the final productions before the theatre was sold in 1979 to become the site of a speciality supermarket. The theatre was stripped of its fittings and the supermarket installed in 1981 only to fail miserably.

The site stood empty and forlorn until it was purchased in 1982 to become a soundstage and recording facility. It remained in this capacity until 2018, basically unaltered and sensitively maintained by its owners. You can still peer through the doors and see the elegant lobby looking pretty much as it did 50 years ago and it sometime turns up as a location in films, TV or pop video. You can no longer see films at the Metro Kings X; they are being made there instead. The building was heritage listed by the city of Sydney, and in December 2020 it was placed on the State Heritage Register. Plans are being proposed to return the building to live theatre use.

Once again very nice,thanks for the posting.

More memories for me: not only did I see the live production of “Hair” at the Metro, but also the Disney movie “Fantasia”.

I started working here as a 19 year old in early 1968 when MGM were showing their Art House Movies at The Metro and was lucky enough to be seconded to The Harry M. Miller Group for the stage production HAIR. Still to this day the most exciting and enjoyable years of my life!!

Saw Fantasia there as well as the 1961 version of Disney’s 101 Dalmations. In 1975 I saw Eve Arden, her husband Brooks West and Judi Connelli in the stage musical Applause.