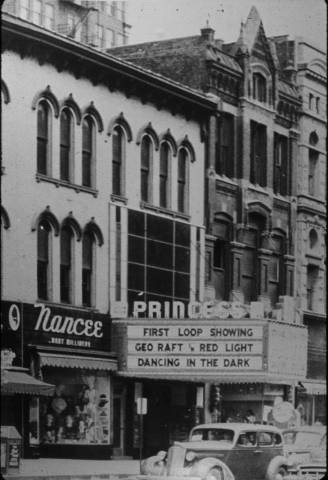 The Princess Theatre was opened prior to 1910, and was located on SW Adams Street at Fulton Street, near the Columbia Theatre. It was part of the Balaban & Katz circuit, based in Chicago, during the 1920’s. It was later acquired by the Kerasotes chain, which ran it until it closed in 1954.

The Princess in my time (l942 until it closed in 1954) was always a 2nd-run downtown theater. I find it hard to believe that it only seated 550, as it seemed larger. It had a large balcony, which you could feel shake when anyone of any size walked up or down the steps!

Here’s a great shot of the Princess:

The Princess Theatre was mentioned in the April 2, 1910, issue of The Billboard. I also found it in the October 7, 1916, issue of The Moving Picture World, which said that the house had discontinued vaudeville and would begin a policy of feature films. The July 4, 1925, issue of MPW had this item:

E. S. Harris is remodeling the Princess at Peoria and adding a new organ and a complete projection room equipment. He will open the house about July 1 with a second-run policy.“

A 1914 photo of the original entrance of the Princess Theatre can be seen here.