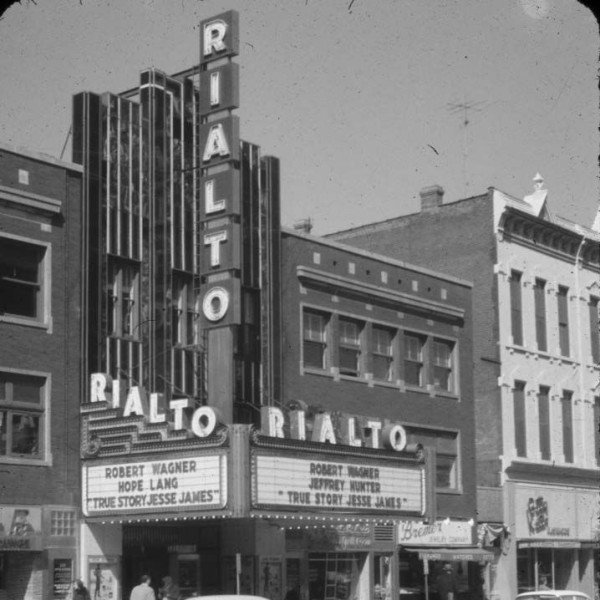 The Hippodrome Theater opened on October 21, 1913 with a seating capacity of 1,674. The theater was originally a vaudeville house. In 1931, the theater was renamed the Rialto Theater and switched to a movies-only policy, operated as part of the Balaban & Katz chain of Chicago. By the early 1950’s, it was part of the Kerasotes Theatres chain of Springfield.

The Rialto Theater was razed in the late-1970’s, to make way for the Peoria Civic Center.

For some reason I liked the Rialto best of all 6 downtown Peoria theaters in my time. It was considered 3rd among the first-run houses (after the Madison & Palace) but it sometimes got the “big” pictures held over from the Madison, which never ran any movie more than a week in the ‘40’s & '50’s. It’s a real shame that they couldn’t incorporate it into the Peoria Civic Center as a performing arts center, as some preservationists implored them to do.

On 8/27/51, the Dixon Evening Telegraph announced that the Rialto had been sold to Kerasotes Theaters by the Great States Theater Group. The transfer would be effective as of September 1, 1951.

Here’s a link to a vintage shot of the Rialto:

My moviegoing years in Peoria, IL were from the early to mid-1960s. We either attended films at the Madison, Palace or Beverly – no idea why we never attended anything at the Rialto.

last film i saw there was star wars [8 times or so] last time was september of 77 i think. im here cause i wish i could go back.. if others are also we must realize its also and probably more the people who helped make those memories..perhaps if some of those people r still living and are kind souls we should seek them out and say ‘'hey’‘ etc.

My Mom went into labor with me while she was working at the Rialto. 1972.

The Hippodrome must have been a combination house from the beginning, not just a vaudeville theater. It is mentioned at least twice in The Moving Picture World in 1913.

The February 9, 1916, issue of The Moving Picture World said that the Hippodrome in Peoria was set to begin its vaudeville season, and shows would include three reels of movies at each performance. The Princess Theatre, under the same management, had just discontinued vaudeville.