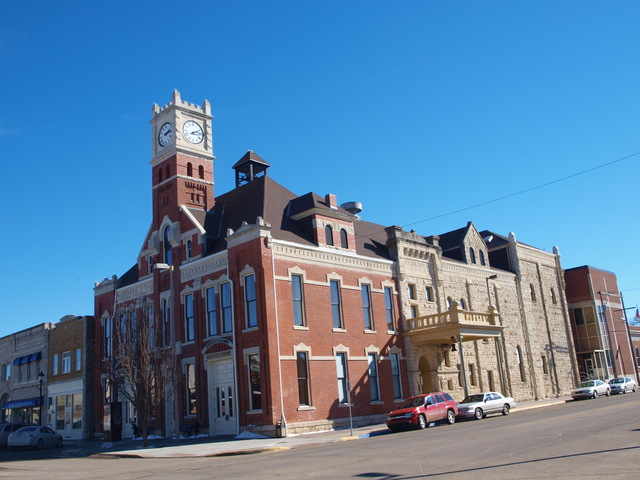 The Opera House opened in January 1882. The stately red brick structure, with a tall four-faced clock tower, was a bustling site for community gatherings. In January 1898, almost 16 years after the day it opened its doors, the Opera House was ravaged by a disastrous fire.

Despite this tragedy, the Opera House was renovated and operated successfully for decades, in a wide diversity of uses, including showing movies as the Colonial Theatre. In 1982, however, the theatre closed its doors.

Today, the Junction City Opera House Foundation is working to preserve and restore this grand structure, and is seeking volunteers and donations.

The Opera House in Junction City is listed in the 1897-98 edition of the Julius Cahn Official Theatrical Guide. T.W. Dorn was Mgr. and the seating capacity was 700. The proscenium opening was 24 feet wide and the stage was 38 feet deep. The theatre was on the ground floor. Hotel Barten was the hotel for show folks. Newspapers were the Sentinel, Union and Republican. The local population was 6,400 including Fort Riley. The Opera House had both gas and electric illumination.

The nomination form for the inclusion of the Junction City Opera House on the National Register of Historic Places says that the building was designed by architects George Wells and J. C. Holland. The auditorium section of the building began presenting movies on a regular schedule in 1919, operating under the name City Theatre. During this period the building still contained municipal offices as well as the theater. The interior of the structure was completely rebuilt into a modern movie theater in 1937.

The building’s exterior incorporates elements of both the Victorian Italianate and Romanesque Revival styles of architecture.

The Kaw now does have a listing.

The Johnson City Opera House was renamed as the C. L. Hoover Opera House in 2008. The correct URL for the official website is now: http://www.jcoperahouse.org/.

The opera house portion of the building is principally housed in the buff limestone portion behind the red brick section (the top of the stagehouse can be partially seen). There is a slideshow of the building over the years here.