Screen on the Green 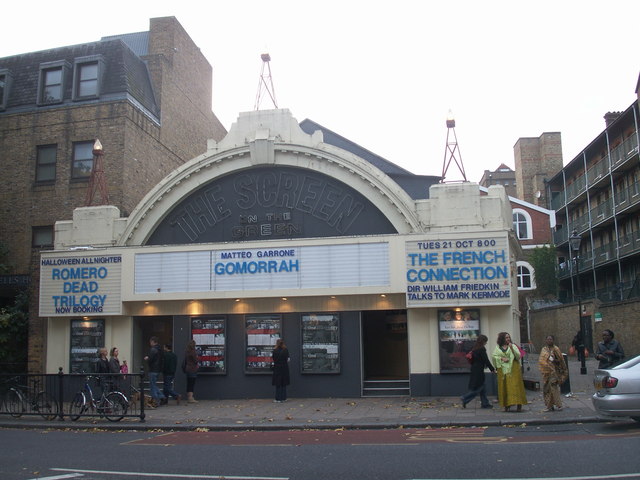 Located in the north London inner-city district of Islington. The Empress Electric Theatre opened in October 1913 and was designed by architects Boreham & Gladding. It had a centrally placed entrance, where the paybox was located. There was no foyer, a pair of double doors led directly into the auditorium. The seating capacity at opening was for 600 on a single floor. There is a barrel vaulted ceiling, with decorative plaster ribs. It has always been operated by independent operators.

Shortly after opening it was re-named Empress Picture Theatre. It was re-furbished in 1951 and re-opened as the Rex Cinema when the seating capacity was slightly reduced to 541. The Rex closed on 29th June 1970, but was purchased by Romaine Hart’s Mainline Pictures Group of Screen Cinemas, who re-opened it on 13th September 1970 as the Screen on the Green with Robert Redford in “Downhill Racer”.

It was modernised in February 1981 to plans by architect Fletcher Priest, one of the main modifications being the creation of foyer space, something the original building never had. This reduced the seating capacity to 300. It was operated as part of the small independent Screen Cinemas circuit until 2008, when the circuit was sold to the Everyman Media Group. It has retained the charm of its original barrel vault ceiling and the exterior looks especially good at night as it is out-lined in neon tubing.

In November 2010, the seating capacity was reduced from 300 to 120, with the installation of luxury armchair seats with foot-rests, individual cushions and ample leg room. Also a licenced bar was installed at the rear of the auditorium.

A 1994 photograph that I took of the Screen on the Green:
View link

NPR’s website recently spotlighted a delightful little video, submitted for an award, about a projectionist who works at this cinema, who talks about his work as a projectionist and himself. The video can be viewed on the website and has some interior shots of the theater: View link

SCREEN ON THE GREEN