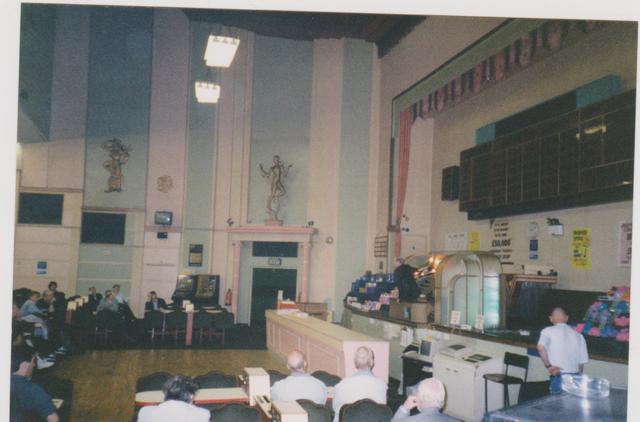 Built on the the site of the 900 seat Dreamland Variety Theatre of 1923, which was later re-named Dreamland Cinema. It was adjacent to the massive Dreamland Amusement Park on Marine Terrace located on the sea front.

The new Dreamland Super Cinema opened on 22nd March 1935 with Greta Garbo in “The Painted Veil” & Laurel & Hardy in “Them Thar Hills”. Architect’s Julian Rudolph Leathart & W.F. Granger came together for the final time (they mutually dissolved their partnership after Dreamland was completed). The spectacular frontage of the cinema was the first of its kind in Britain, having a huge fin tower which gives the building prominence from a great distance along the shore line. There was a large café which had windows giving a view out to sea. Additional facilities included bars and a ballroom.

Inside the auditorium seating was provided for 1,328 in the stalls and 722 in the balcony. The interior design was by John Bird-Iles (son of the owner of the complex) and sculptures of sea nymphs set into recesses each side of the auditorium were the work of Eric Aumonier. The cinema had a fully equipped stage and has a 40ft wide proscenium. It was equipped with a Western Electric(WE) sound system. There is a Compton-Noterman 4Manual/19Rank theatre organ with illuminated console and a grand piano attached which was opened by organist Lewis Gerard.

The cinema was closed from 1940 due to the war and didn’t re-open until 1st July 1946. The Dreamland Cinema was twinned and re-opened on 22nd April 1973 with two cinemas in the former balcony which seated 378 and 376. The former stalls area became a live theatre using the full facilities of the stage. However the live theatre was not a success and closed on 11th January 1975 and was converted into a bingo hall.

A third screen seating 60 persons and using video projection was created in what had previously been the balcony bar area. This opened on 10th May 1981 and continued until closing in 1993 when the Dutch firm Bembom Brothers took over the running of the cinema and amusement park.

In 1992, Dreamland Cinema was designated a Grade II Listed building by English Heritage. In early-May 2008, the building was up-graded to Grade II* Listed.

In March 2022 planning permission was granted to remove the original ‘Dreamland’ signage from the exterior of the building for it to be temporarily replaced by the name ‘Empire’. This was due to the building be featured as a location for the filming of “Empire of Dreams” (a love story set in a seaside cinema) directed by Sam Mendes and starring Olivia Coleman & Colin Firth. Some scenes will also be filmed in the interior where other small temporary changed have been made. Once filming is completed on 15th May 20222, all original fittings will be fully re-installed.

How very, very sad. The black and white photo in the BBC report shows it as stunning place when it first opened.

Fear not as far as our memories are concerned. The Royal Institute of British Architects has a superb collection of past photos.

Very simply type in “Dreamland” in the ‘quicksearch’ box on the left.

Yet another traditional cinema which has lost out to the onslaught of the multiplex – I wonder who will be next?

Reeltime Cinemas subsequently went into administration. However, cinema fans will be pleased to know that two of the cinemas in this part of south-east England, which were managed by that company have survived. They are;

Sadly the New Century Cinema at Sittingbourne closed along with the Dreamland.

The Foyer is about to be restored to its former glory along with the Sunshine cafe above. Restorers are looking to find traces of the original Walpole mural in the cafe.

Is the Dreamland Amusement Park still there(and operating), and is it Grade 11 listed as well?

The Dreamland Amusement Park re-opened in 2015. The Scenic Railway (roller coaster) is Listed Grade II and there may be another couple of rides listed. The Dreamland Cinema building is Grade II* Listed and the animal cages at the rear are Grade II Listed.

The original lighting scheme has been suitably reinstated with both traditional glass neon tube and LED neon tube with LED uplighters all in original yellow and blue.

Sans serif reproduction letters have been reinstated on the fin replacing the 2012 restored 1970s replacement fittings. The brick bullnose has also finally been reinstated to the fin.

Also close to the original standard, both DREAMLAND and (1949 addition) DANCING letters of traditional glass neon tube upon metal cast sans serif letters have also been reinstated on west and east fascias of the fin at the top.

Reproduction metal letters closely replicating the original installations have been reinstated across the marquee fascia.

The original AMUSEMENT PARK and arrow fittings have not been reinstated on the west elevation above Hall by the Sea road as this was seen as an unnecessary advertisement that did not complement the original lighting scheme or building.

The travertine and glazed faience fascias have been completely uncovered from later dilapidated hoardings and repaired or reinstated or replaced.

Various other window fittings across the building as a whole have been reinstated or replaced with reproductions of the original standard.

The original bronze decorative doors have been reproduced and reinstated in both the foyer entrance and entrance to the former Sunshine Cafe. Reproductions of the original Public and Saloon bar entrances between their window displays are due to be installed at a later date. A commissioned Dreamland archive art piece has been installed in this elevation with a temporary glass exhibition facade fitted for this purpose.

A traditional cage gate in yellow is due to be fitted across the foyer entrance for security purposes. It has been given listed building consent for a period of 3 years unless an extension period is approved. This suggests that an operator for the former theatre/cinema auditorium is surely less viable into the short term future.

The foyer and booking concourse was due to be restored to original standard as part of the project funding, but appears to have been stalled.

Restoration of the former Sunshine Cafe space also remains in question, although all original access points have now been uncovered and restored throughout the building as a whole. This now includes the demolished connections to the pre-existing former ballroom building at the south of the site.

Removal of later Bingo hall operation fittings to the auditorium are due to begin shortly, uncovering the original proscenium and general original standard.

Unfortunately it is unlikely that the extended balcony and blockwork that was installed to split the cinema into multiscreen operation will ever be removed. This will prevent the original auditorium standard as a whole to be reinstated, with the damaged figurines on both sides to remain lost. The original safety curtain is also due to be be removed and disposed of due to regulations of asbestos control.