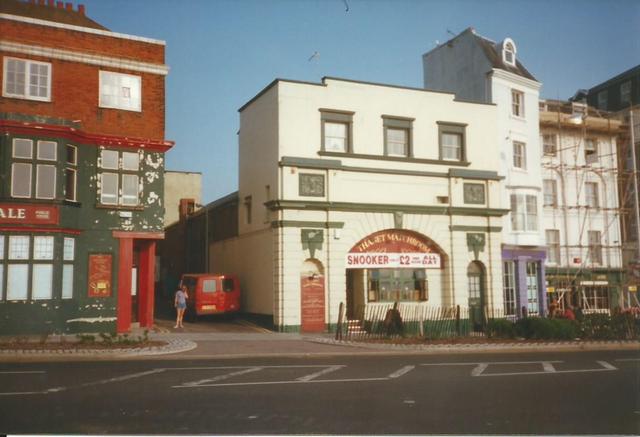 The Parade Cinema opened on 26th June 1911. Typical of a purpose-built cinema of its era, it had a barrel vaulted ceiling, and all seating was on a single floor. The right-hand side of the auditorium was extended beyond the main body of the auditorium, which gave a distorted view onto the screen for seating on that side. A sliding roof was provided for ventilation. In 1914 it was re-named Picture Theatre. The Parade Cinema was renovated in 1937.

By 1952, it had been taken over by the Classic Cinemas chain, and was re-named Classic Repertory Cinema. It was closed in 1963, and became a Vogue Bingo Club.

From 9th July 1979 it went back to cinema use as the New Parade Entertainment Centre. But this was short lived and it became a 16mm cinema club screening uncensored sex films which closed in November 1981.

In 1982, it was converted into a snooker club. A false ceiling has been inserted in the auditorium, hiding the original barrel vaulted ceiling, and the main entrance has been partially bricked in. In 2009, it is known as the Thanet Matchroom Social Club. In 2014 it was converted into an indoor market, and the false ceiling in the auditorium was removed.

Photo of the Parade as a snooker club here:–

The book “Margate’s seaside Heritage” notes the façade has panels decorated with masks and musical instruments, suggesting the building may have been conceived as a Music Hall

In late 2014 the closed snooker club is being converted into an indoor market. The curved ceiling should be revealed again , as seen on You Tube.

Also known as Picture Theatre in 1914