Albermarle Back Road,
Scarborough, YO11 1YA 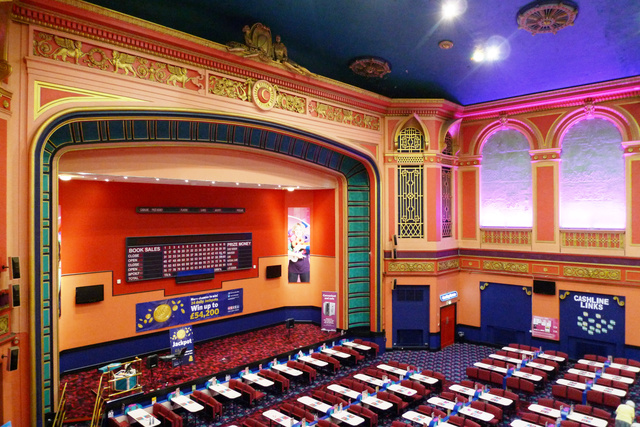 This is a large cine-variety theatre, opened just before the advent of sound films, on 11th March 1929 with Alice Terry in “The Garden of Allah” It was equipped with a Fitton and Haley 2Manual/27Stops organ which was opened by J.W. Ainsworth. It also had a large stage (flytower), dressing rooms, and orchestra pit.

Despite these facilities, the Capitol Theatre was used as a cinema, with only rare live performances on its stage.

The facade is covered with white faience tiling with 3 large rectangular windows in the centre surmounted by 3 semi-circular panels containing Greek mask faces with violins (depicting music) in the 2 outer panels and comedy and tragedy masks in the center.

Above this there is a projecting cornice with a cartouche and the ‘Capitol’ name also in the faience. There are 3 pairs of cental doors with 2 further exit doors on each side.

A secondary entrance was provided on Westborough, again in faience (now painted) and with a repeat of the crest cartouche. On the opposite side is a back access road with stage get-in, stage door and dressing rooms.

The interior is particularly lavish with a series of arches at balcony level continuing to the deeply recessed proscenium arch in a Classical style. The corners next to the arch are splayed and in the 2 narrower arches with ornamental ironwork were the organ pipes (organ now removed).

Above the proscenium arch is a Greek/Roman frieze with a medalion in the center containing the initial ‘C’. The ceiling is a plain shallow barrel vault.

The stalls foyer is small but at balcony level the former cafe now provides a spacious foyer lit by the 3 central windows.

It was taken over by Classic Cinemas in the mid-1970’s and briefly re-named Classic Cinema, with bingo operating most days, but with the circle seating being used when films were shown. It soon passed in the ownership of Mecca Bingo Ltd. and was operating as a Mecca Bingo Club from March 1977.

The Capitol Theatre was designated a Grade II Listed building from 1996.

The Capitol Theater opened on 11th March 1929 with the MGM silent movie “The Garden of Allah” starring Alice Terry. The original seating capacity was given as 2,200. It was equipped with a Fitton & Haley 2Manual/27Stop theatre organ that was opened by J.A. Ainsworth.

In the mid'1970’s the cinema was taken over by Classic Cinemas and re-named Classic. Bingo began to be played in the stalls area on some days and evenings of the week and films were screened less often, now viewable only from the original balcony seating when bingo wasn’t being played below. This situation only lasted a short time, as by 1977 Mecca had taken over and it had become a full time bingo hall which remains in use today.

A vintage shot of the cinema here:

The Capitol closed for alterations which separated the circle into a 630 seat cinema, whilst the former stalls accommodated 1,400 bingo players. A wall was constructed at the front of the balcony with a new screen surrounded by a swagged pelmet and fronted by new curtains. The architects involved were Eric Neve and Associates, the contractors were F Shepherd & Son Ltd, the cost was claimed to be £30,000. The Cinema re-opened 11th March 1968 with “Smashing Time” starring Rita Tushingham.

This followed a months closure the previous year when from 7th May 1967 to the 5th June the Capitol was closed for alterations and redecoration in the hands of Mecca. From this point the films were shown once nightly, seen from seats in the circle, whilst bingo was played in the stalls afternoons and early evening. This was reported as costing £60,000.

The cinema did not last very long and after it had closed the balcony sub-division was removed to restore the Capitol to its original appearance for bingo throughout. The usual staircase at one side of the balcony to the stalls was installed.

A 1989 shot here showing the building operating as the Capitol Plaza under Mecca.

The 1968 conversion for Mecca produced a particularly pleasing cinema in the original, large balcony. Not only was the large screen frame set within a “soft” proscenium but the silver satin screen curtains were very effectively lit by three colour circuit footlights (red, amber and blue)and the “new” cinema was large by today’s standards. The cinema looked splendid and had a really good atmosphere. The aesthetics were matched by splendid sound and projection quality. I saw several films there during 1969 including “Funny Girl” where the standards of presentation were top notch. By the mid ‘60s, the original, elaborate auditorium had, like many vast and ornate cinemas – Granadas particularly – taken on a somewhat tired and dusty appearance which wasn’t helped by economies which involved using a bare minimum of decorative lighting in the auditorium. Up until a small fire on stage and its closure for Mecca’s conversion, the Capitol had a spectacular set of screen curtains which were made by the Holophane Lighting to take advantage of their lighting system. The curtains were identical in design to those installed at the unrelated Rialto cinema in York where Holophane also created the decorative lighting scheme. The curtains were black velour with a striking, appliqued design of various colours of satin forming lower, horizontal bands in green and red above which were what appeared to be abstract tree-like shapes in shades of green from which gold birds appeared to be taking flight. The curtains must have looked magnificent in the days when the red/blue/green footlights were mixed and blended to produce countless different hues on the multi-coloured satin “picture”. The black background virtually disappeared, of course, and gave the design an almost 3D look. By the '60s, only one of the footlight circuits was being used and this was filtered primary green with just the outermost three lamp compartments filtered red. The effect was still quite good with the red and green separated by an amber glow where the neighbouring compartments allowed the red and green to blend.

There is a special screening of ‘Rogue One’ at the former Capitol Theatre on 4th May 2017 – so not long in which to obtain tickets:–