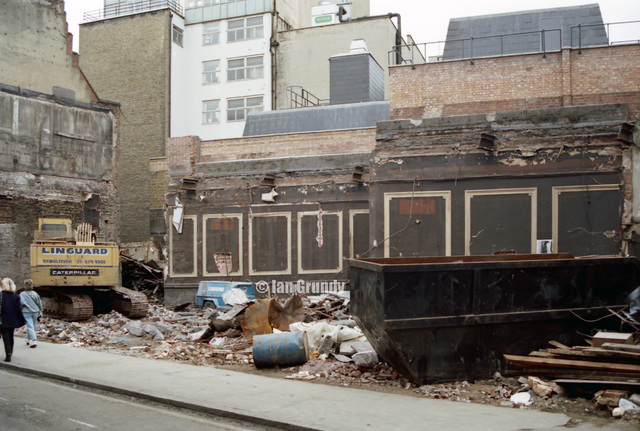 Opened as the Cinema de Paris on 12th February 1910, the entrance was on Bear Street at the rear of the auditorium. Designed by architect William Hancock, seating was provided for 360, all on one level. There were three private boxes located halfway back in the auditorium on the right-hand side and there was a sliding roof, to provide ventilation on hot days.

In 1913, a new entrance was made on the main Charing Cross Road, designed by architect Percival Hawkins, a long narrow corridor led to the auditorium, which was now entered from behind the screen.

In 1926 it was reconstructed to the plans of architect Robert Atkinson and it re-opened with 476 seats as the Cameo Cinema. The auditorium now contained decorative plaques by C.F. Aumonier and paintings by T.B.W. Champneys. In March 1928 a Compton 2Manual/8Rank theatre organ was installed. From 26th December 1932, the Cameo became a newsreel theatre. Further minor alterations were carried out by architect George Coles in 1935.

In 1936 it was re-named Cameo Revudenews, the original entrance on Bear Street was in use to serve the rear stalls patrons in the ‘better’ seats. It was taken over by the Clavering & Rose circuit in the mid-1930’s. The Compton organ was removed to the Ritz Cinema, Lincoln in 1942.

It remained a newsreel cinema until October 1956, when the name was changed to Cameo Royal, and the policy of screening foreign-language (X) Certificate films began with Brigitte Bardot in “Mam'selle Striptease”.

Taken over by the Cannon Group, it was re-named Cannon Royal on 6th December 1985 and closed on 23rd June 1988 with “Broadcast News”.

The Cannon Royal was demolished in February 1989, and ground floor retail space was built on the Charing Cross Road frontage, with offices above, that has its entrance on 11 Bear Street, and known as Cameo House.

Opened as the Cinema de Paris on 12 February 1910.Architect was W.Hancock and it seated 360.A new entrance was created in Charing Cross Road in 1913 and Architect Robert Atkinson re-designed the cinema in 1926 with 476 seats.It was also known as the Cameo and Classic over the years and only took on the name Cannon Royal in 1985.It was demolished in February 1989.

A photograph of the Cameo Royal that I took in 1964:
View link

One of the most awful, dirty and dangerous cinemas ive ever had the misfortune to visit-ever! It showed second run movies or worse. It was mainly visited by vagrants and tramps. My friend and i stayed less than 20 mins after seeing sleeping patrons being pickpocketed and one guy just urinating at his seat- im not makeing this up-honest! We left so fast we didnt even think to ask for our money back. Ive spoken to many people who agree and were amazed i didnt know its reputation during its latter years. . I must and should be ashamed to say this but the day i walked past and saw it being bulldozed i didnt feel bad at all.

I worked here briefly in the 80’s…and I agree with what Ian says. It was a dreadful place. During that time it was basically a glorified vagrants hostel.

They used to charge a flat fee of a pound or so, and you could stay all night, and get free coffee. But it just attracted all the vagrants, drunks and other unsavoury characters. It had a really bad reputation, so much so that very few people would ever go there during the day when they showed normal films.

I was a junior manager when Ray Price was the manager during 1979-1980. It was (in)famous for the all-night screenings which attracted the most amazing collection of knights of the road and bag ladies. The smell was terrible and I fully believe the account of urinating in the seats.

Somebody told me that it was called ‘Royal’ after the visit of a royal personage in earlier days.

While being stationed at the Eros, Piccadilly, Classic Cinemas sometimes made me the night relief manager.

Sometimes the staff sprayed disinfectant into the air – it was needed!

Ken was the daytime attendant and earlier a Mr Timbou was the night manager.

The tea/coffee and biscuits were dispensed from a kiosk at the back.

I remember seeing all night Godzilla films there around 1979. This was the only way to see these movies as they were never shown on TV. Yes it was unsavoury with dirty old men pleasuring themselves etc It was awful….