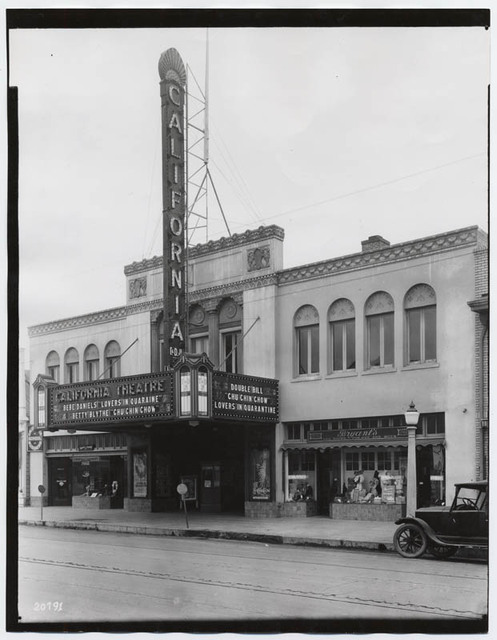 The California Theatre was located in the Oak Park district of Sacramento, once a thriving community within the city with numerous small shops and one other smaller theater, formerly the Oak Park Theatre and now known as the Guild Theatre.

The California Theatre was opened by the T & D Jr. Enterprises circuit on February 20, 1925 with Katherine MacDonald in “The Scarlet Lily”. The theatre was decorated in an Egyptian style and was equipped with a Hope-Jones Wurlitzer organ, opened by organist Edwin Walton. The California Theatre was probably one of the first in Sacramento to install adjustable reclining seats sometime during the 1940’s. It was destroyed by a fire in 1956.

I grew up in the Oak Park community, (1940-50s) a wonderful close-knit neighborhood with a good mix of ethnic cultures. The centerpiece being the James McClatchy park.

The California and Oak Park Theatre(s) were my ‘babysitter’.

Theatre owner chain was T&D jr,(United Calif). Manager was Kay
Naify. Theatre auditorium had a Egyptian motif. Comment by Robert
Watkins was correct about a ‘early style’ rocker-recliner. They were
located only in the balcony ‘loge’. For that luxury, you paid, (as I
recall).75 cents. Regular ticket price: Child .12; Student .25;
Adult .45.

In 1956 a fire destroyed this beautiful house, (never rebuilt). Fire started in, (strangely enough) the ‘loge’ seating. A cigarette dropped under the floor to a ‘concession debris’ cleanout area. I
was off that night, but stood watching, (with much of the Oak Park
community) as it went up in flames. Several firefighters suffered
minor injury, but no others hurt. The firestation was just a block away.

I will post a photo when this site resumes their ‘add a photo’ feature.

If you would like to read about the old Oak Park, (Guild Theatre) I
have a posting under Oak Park Theatre, Sacramento.

Thanks Lost Memory…The Wurlitzer was still in place when the house burned. Still being used on certain occasions and for general entertainment, (pre-show). I wish I could remember the gentleman’s name that normally played. The pipes were housed on each side of the stage on a upper loft. Organ was on the right side, and a piano was on the left. Lost Memory has ‘jogged’ mine…one night a week,(janitor day off) I had to stay after closing,(midnight or so) and sweep out auditorium. The first few times I did this, (as I was just 14 or so) I was hearing this very strange and odd sound when I was in the balcony area. It was a bit scary and un-nerving, and when I stopped sweeping or moving about, so did the sound. Took me a while to finally realize the sound was coming from the organ loft pipes. The moving about in the upper balcony sent enough movement to start a vibration of the pipes. Talk about your stories of movie house “mayhem and terror”.

When I was 6, we moved from Porterville to Sacramento, and settled at 3304-35th Street, spitting distance from the California Theater. And so, from 1942 to 1949, I spent every (and I mean EVERY) Saturday and Sunday at the movies. There was always a new show on Sunday, so that was a double treat. And Saturdays always had two movies, previews, news, and a serial. I loved the Nyoka series, and always play-acted each sequel in my back yard. Once a month they had a drawing,and I once won a baseball, which I treasured it to death. I can honestly say that the movies of the 40’s emphasized honor, good strong character, and always doing the right thing. These movies molded me into the person I am today, and I thank God I lived at the right time to experience the joys that the California Theater offered to us. I remember that huge candy counter, and Big Hunks were really huge, and cost a nickel. A box of Milk Duds was also a nickel. Ditto with a bag of popcorn and a coke. My mother always gave me 50 cents on Saturday and 50 cents on Sunday so I could get my movie fix. It cost 9 cents to get in, and when I turned 12, it went up to 14 cents. There was a candy store next to the theater, and in those days, all sorts of stores. I really enjoyed the Ice Cream shop across the street, where they gave a double scoop on special cones, side by side. I miss those days, and I feel sorry for the kids of today who don’t experience what we old-timers did back in the 40’s. Billie Holliday

see http://www.flickr.com/photos/centerforsacramentohistory/4997210588/in/photostream/ in 1949, it could be my grandfolks (and even me) watching from atop the marquee.

My grandparents lived in the apartment above the marquee of the California Theater in the late 40s and early 50s. Grandad’s Sewing Machine Store was directly across the street, and we’d gaze down upon it from the window behind the marquee. I can hear the movies below and see the neon colors coming in the windows at night.