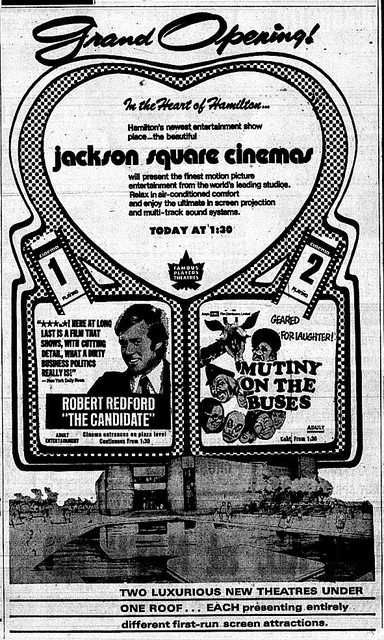 The Jackson Square Cinemas opened as a twin August 23, 1972 and was expanded into a six screen movie house by 1989.

Each auditorium is named after an old theater. The Jackson Square Cinemas is the only theatre left in downtown Hamilton. Originally operated by Fammous Players, it was taken over by the independent Empire Theatres in 2005. In 2013 it was taken over by Landmark Cinemas of Canada.

This is a great movie theater, but I find its not as busy as it used to be back in the 80’s & 90’s. So if you like to see a movie in a somewhat quite movie theatre then this is the place for you. Is a shame that all of the other Downtown theaters in Hamilton have all closed up. The Jackson Square Cinemas is the one and only movie theatre left in Downtown Hamilton. I wish I could add a photo of this theatre but Cinema Treasures is not posting photos at this time. :–(

This theatre is bought by Empire Theatres.

Yes, its true. Famous Players sold it off. I was there two nights ago to watch Ultraviolet. I noticed the condition of the theater I was in (#2) was pretty bad. The plaster on the ceiling is starting to deteriorate.

We’re getting close. 14 new downtown projects were just announced to be funded, right in the core. If we can get the Lister Block back in the game, things are going to get a lot better downtown.

Thats the nature of business, Cineplex sold off high rent, low attendance and ageing theatres to Empire so they can make more money then them. I agree the Tivoli and the Century need to be brought back. If Jackson Square needs to be replaced, people will need to write letters and petitions to Empire or even Cineplex to build new theatres in downtown Hamilton. Large theatre companies such as Cineplex losing money due to low attendance and in my opinion, it is a worse time to build theatres right now.

PARTICLE MAN, “hi”. What 14 projects were announced for downtown Hamilton’s core. I have not heard about this. Thanks.

Since the last post here on 02 July 06 the Tivoli has been torn down after it collapsed and Jackson is still the only theatre in Hamilton apart from Westdale, Movie Palace and that one on Upper James. Sorry but single screen theatres aren’t coming back to Hamilton. Jackson square can hardly fill an entire theatre even on opening night of most major films and I know since I live near by and go there to see the latest flicks.

With the economy in the toilet most people can’t afford to spend money on a movie not to mention parking, food and drinks. Then there is the fact that alot of people download bootleg copies off torrents or wait for the DVD which is usually out in 3 months on average.

Reading this site I’ve noticed how there were a lot of theatres up untill the 80’s such as the Avon, Century/Lyric, Tivoli and they were killed by VCR’s the same way that video stores are being killed by digital downloads.

@Chad, Empire Theatres is the second largest theatre chain after Cineplex which bought Famous Players. I won’t consider them an “independent”. Check empireco.ca for example. The owners of Sobey’s and Price Choppers also own Empire Theatres. Empire Theatres also own some former Silvercities and Cineplex Odeons across Canada.

The Jackson Square 6 seems to do just fine. Every night that I take a stroll through the mall, theres always a giant line to purchase tickets. I’m sure it’s at least breaking even. It’s been a long time since I watched a movie there though. I guess I’m just too pampered with the stadium seating and such at Silvercity.

Lyric and Tivoli still sit as they always have…

Originally, the Jackson Square Cinemas was only two theaters (1 & 2). They are still great places to see a movie…large auditoriums and great screens. The added theaters are a lot smaller, like a typical multplex. I saw a lot of movies there, during the late 1970’s and 1980’s. And two-for-one movies: it was easy to sneak into the other movie. Just go to the bathroom and walk right in to the other show. They didn’t stagger the start times (but if the movie ran over two hours, then forget it). Kirk Douglas appeared here, to promote “Scalawag” on the opening Friday (never saw Kirk in the can).

The Jackson Square Cinemas are no longer owned and/or managed by Empire. Landmark is now running them. There was an article in the newspaper late last year about the takeover. I will report further details later, including an official name.