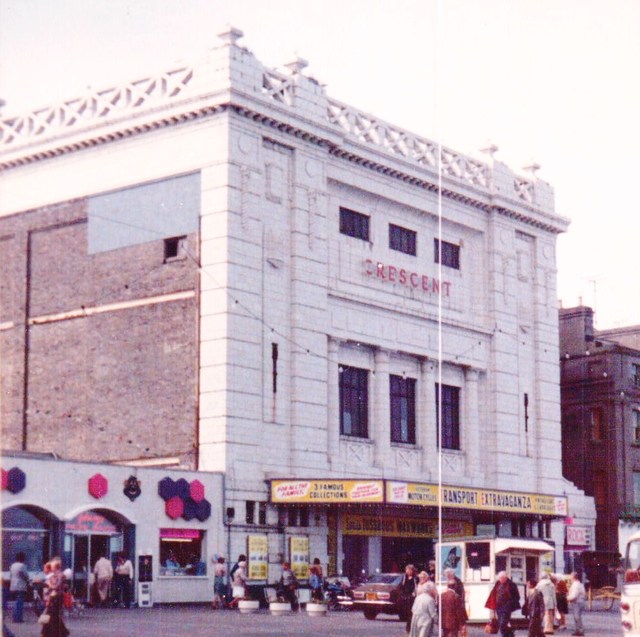 The Crescent Picture House opened on 9th June 1920 and was designed by local architect W.H. Lomas. Located in a prominent position on Central Promenade, the facade of the building is quite imposing, with an almost Classical style rendered in white faiance tiles.

Inside the auditorium, the style could be described as Medieval, with a setting of a 15th Century courtyard, fine tapestries on the walls, and the proscenium arch styled like a castle gateway, complete with a heraldic shield. Seating was provided in stalls and cirle levels.

Like most cinemas on the Isle of Man, it was owned and operated by the Palace & Derby Castle Co. Ltd. The Crescent Cinema closed in the early 1970’s and was converted into an exhibition hall for waxworks and a family indoor amusement arcade.

When I saw it in August 2004, it was in use as a bar/amusement arcade and gym/health club, known as the Crescent Leisure Centre. All internal decorations had been removed. At that time there was talk of plans to demolish the building, and in 2008, the auditorium was demolished, to build apartments. The facade was retained.

The building has now been developed into modern apartments, but the imposing facade has been retained.

Imposing indeed. The interior must have been quite something.

There seems to be a bit of confusion here. The Crescent Picture House was situated in the Pierrot Pavilion and opened in July 1923. It was obviously a success as the larger Crescent Cinema was built next door and opened in June 1930. That lasted until the early 1970s and is now apartments with the facade retained. The smaller one must have closed when the larger one opened. It was eventually demolished and the Crescent Leisure Centre occupied the site. Some info here: www.cinematour.com/tour/fo/5658.html