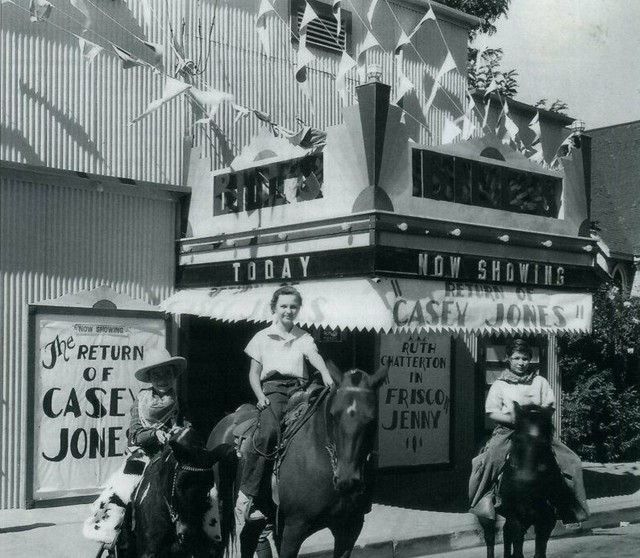 According to local historian David Wilkinson writing in the Daily Democrat on February 11, 2007, this theatre was first opened in 1914 as an open-air theatre called the Airdome. It was later roofed and became the Woodland Theatre. It was actually opened on May 7, 1914 with “Washington at Valley Forge”. It was roofed over in Fall of 1923, reopening on November 17, 1923 with Tom Mix in “North of Hudson Bay” & Harold Lloyd in “Get Out and Get Under”. Bill Cornwell remodeled it further and opened it on March 30, 1933 as Bill’s Theatre with the movie “Raffles” starring Ronald Colman.

This notice can be seen in the September 30, 1936, issue of the Daily Democrat newspaper advertisement: Wanted: Attractive Girl. 120 to 130 lbs. for assistance stage work; must Be Over 21. Dr de Zita, Bill’s Theatre or Hotel Del Mar.

On October 1, 1936, Bill’s Theatre shared an advertisement with a furniture store, which promoted a bedroom set. It Read: Dr de Zita, psychoanalyst and hypnotist. See young woman hypnotized on stage tonight. See her sleep 24 hours in the show window of Woodland Furniture Co. Our window is reserved for Dr. de Zita and we are pleased to have his subject in our window. She cannot awake except at the will of Dr. de Zita. (This promotion, in itself, would have made a great Woody Allen movie, with Allen as Dr de Zita).

I was in a building in Dead Cat Alley a few years ago. There were a lot of pre-war buildings in that area, but I can’t recall if any of them looked like a former theater.

Googlemaps shows the back of a building at this location that looks a lot like an old theatre…a big one, too.

There appears to be an arched entranceway on Second Street but googlemaps doesn’t have a street view of it.

…and a big sign in front that says “Woodland Opera House State Historical Park.” Duh. There seems to be some cross-over in the two histories (in that the Woodland Opera House claims to have been boarded up from 1913 on, and Bill’s Theatre starts up in 1914). But the building I’m looking at is the old opera house, which, I assume, is a different theatre, but seems to have been in about the same place. Hmm.

The non Woodland historian (me) said that Henry Laugenour launched the first of two theatres he owned with the Air-Dome opening May 7, 1914 with the Francis Ford film, “Washington at Valley Forge.” He then opened another airdome on May 7, 1914 leading the original to be called the Woodland Airdome. T.H. Dixon took on the venue building a roof over the structure in the Fall of 1923. He renamed the venue the Woodland Theatre reopening on November 17, 1923 with Tom Mix in “North of Hudson Bay” and Harold Lloyd in “Get Out and Get Under.” The roof was constructed to allow easy removal so it could operate as an airdome – something it decided against.

At the end of a ten year lease, William Cornwell re-equipped the former Airdome turned Woodland Theatre in March of 1933 with a contest to rename the venue. The winner was announced and the venue ran under the selected name of Bill’s Theatre. Its grand opening film was on March 30, 1933 launching with Ronald Colman in “Raffles.”