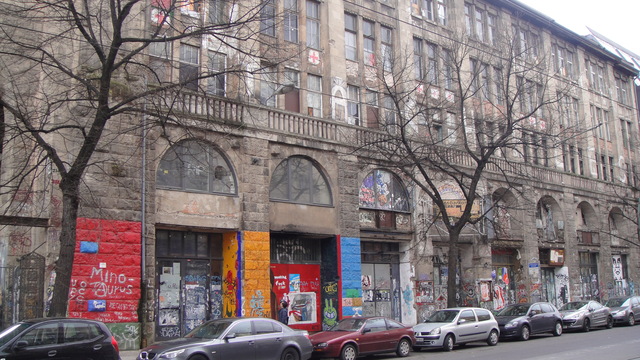 Housed in a huge classical building named the Kunsthaus Tacheles, which was built as a shopping centre in 1906. It has an imposing stone facade (riddled with bullet holes), which barely survived World War II. This has the look of a student anarchist alternative cinema with its grafitti and poster clad entry and rear yard that resembles something out of Mad Max.

It is run by the Tacheles chain and shows independent indie films.

Opened in 1949 as the Studio Camera (Im Tacheles) Berlin, with a seating capacity for 99. It was also the screening room for the GDR State Film Archive. In 1991, it was re-named Kino Angenehm. In the 2000’s it was operating as High End 54, screening independent movies and live performances. It had closed by April 2015.

The Kunsthaus Tacheles is a Listed building.

When I visited in April 1999 the cinema was called the Camera im Tacheles in advertising material, although this name did not appear on the exterior.