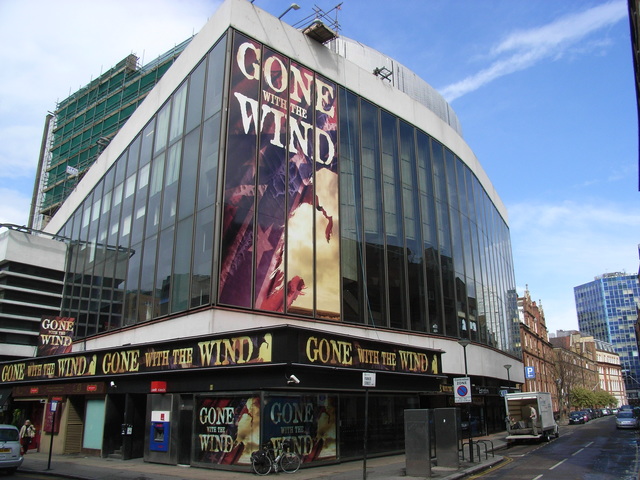 Built on the site of the Winter Garden Theatre which was designed by architect Frank Matcham in 1911 and closed in 1960. The New London Theatre is the only modern theatre in London’s West End theatre district. Located in Covent Garden, it is a little off the beaten track, although quite close to the famous Theatre Royal Drury Lane.

The New London Theatre was designed by architect Paul Tvrtkovic, assisted by famed stage designer Sean Kenny. The entrance is on Parker Street, where there is a spacious foyer with the booking office. Upstairs, there is another large foyer and bar area, with a plate glass wall overlooking the street.

Inside the auditorium, the seating is provided in orchestra stalls and a balcony which has five rows of seating. The first eight rows in the front stalls seating area are mounted on a revolve, which allows the theatre to transform from a proscenium stage theatre, to theatre in the round. There is also a stage revolve, and there are nine dressing rooms which can accommodate up to 36 artistes. The proscenium is 56 feet wide and the stage is 38 feet deep. The building also contains a cabaret club, a basement nightclub, a public underground car park and a residential tower block.

The New London Theatre had its first audience on 23rd and 24th November 1972, when an invited audience attended a one woman show “I Wish You Love” staring Marlene Deitrich. It was recorded for television and broadcast in the UK on 1st January 1973 (it was later released on VHS & DVD as “An Evening With Marlene Deitrich).

The New London Theatre officially opened on 2nd January 1973 with Peter Ustinov in the play "The Unknown Soldier and his Wife". This was followed later in 1973 by a young (and relatively unknown) Richard Gere in the UK premiere production of "Grease". Neither of these two productions had long runs and were followed by a succession of flops.

In 1977, the theatre was converted into a television studio, which hosted snooker championships for several years, and the BBC’s ‘Song For Europe’ contest in 1977. It was during this time that a series of films were screened, among them a West End re-run of Julie Andrews in "The Sound of Music", and several other recent ‘blockbuster’ films.

The New London Theatre finally found success, when on 11th May 1981, the World Premiere production of the Andrew Lloyd Webber, Trevor Nunn musical "Cats" starring Elaine Page began it record breaking 22 years run at the theatre, ending in 2002. The production fully utilised the theatre’s front stalls and stage revolve equipment, transforming the layout of the theatre at each performance. During the run in 1991, the theatre was purchased by The Really Useful Company, headed by Andrew Lloyd Webber.

This was followed by a revival production of the Andrew Lloyd Webber musical "Joseph, and His Amazing Technicolor Dreamcoat" when ran for 30 months. Since then the Blue Man Group have appeared, as has Ian McKellan in "The Seagull" and "King Lear", produced by the Royal Shakespeare Company. In the spring of 2008, a musical production of "Gone With The Wind" flopped, as did the next prduction "Imagine This" which only lasted a month. The next production (in November 2009) was the National Theatre’s production of "The War Horse", which opened 31st March 2009.

In 2018 it was renamed Gillian Lynne Theatre, named after the choreographer of the musical “Cats” and the first London theatre to be named after a woman. Sir Andrew Lloyd Webber’s The Really Useful Company is now known as LW Theatres.