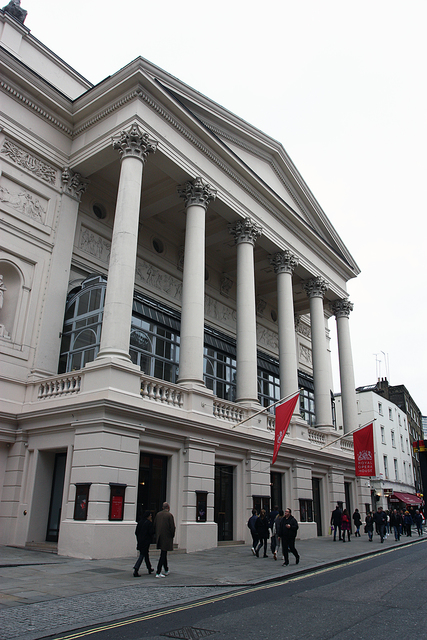 The current Royal Opera House, Covent Garden is the third theatre to be built on this site. The first theatre was opened in 1732 as the Theatre Royal, Covent Garden, it was designed by Edward Shepherd. It was modernised by Henry Holland in 1791, and burnt down in 1808. The second theatre was designed by Sir Robert Smike (architect of the British Museum), and was redesigned by Benedict Albano as the Royal Italian Opera House in 1847. This burnt down in 1856.

The current Royal Opera House was designed by architect Edward M. Barry, son of Sir Charles Barry, the architect of the Palace of Westminster(Houses of Parliament). The Grecian portico on the front of the building was saved from the previous theatre. It opened on 15th May 1858 as the Royal Italian Opera with "The Huguenots" by Meyerbeer. Originally seating 1,897, with boxes on the stalls circle, Royal circle and amphitheatre levels. Today, the boxes have been removed in the Royal circle and amphitheatre levels, but have been retained in the stalls circle level. The auditorium is horse-shoe shaped, to allow for people to be seen (in some cases rather than actually getting a good view of the stage!)

Besides opera performances (by the Royal Opera Company), and ballet performances (by the Royal Ballet Company), the theatre has had other uses. It was used as a Government store during World War I. The film "The Three Musketeers" starring Douglas Fairbanks Sr. was screened for a season, beginning on 19th December 1921. In 1939, at the outbreak of World War II, the theatre was taken over by Mecca Dancing and became a Mecca Dance Hall. In February 1946, it re-opened as the Royal Opera, with performances by Sadler’s Wells Ballet Company (later to become the Royal Ballet Company). In 1972, while the historic Covent Garden Market was still operating (it closed in 1974) the Covent Garden area was used extensively by Alfred Hitchcock as a location for his film “Frenzy”.

The Royal Opera House was given a major refurbishment, funded by the National Lottery, which was completed on 4th December 1999 when it was re-opened. The Royal Opera House is a Grade I Listed building, with the adjacent Floral Hall building, now used as an enlarged entrance and for other facilities, Listed Grade II.

A 1978 vintage photo of the Royal Opera House, before the recent refurbishment, can be found here:–

I went here many times for performances while visiting England. Every time I went the place was sold out. Years ago the ticket office was located, not in the foyer, but in a storefront across from the right side of the theater. At least once I got a last-minute ticket there in the “side-slips” of the top balcony for only one pound. The top balcony was called the “amphitheater” and there was a seperate entrance for it on the right side of the building. It was a very long climb up to the top. I believe that the 1948 movie “The Red Shoes” has some scenes filmed inside the ROH ?? Not sure of that. I toured the theater, including the stage and wings, in August 1989 with a group of Theatre Historical Society (USA) members.

Ron, I may have served you tickets, as I worked for 4 years (1972-1976) in the Floral Street box office, down the right-hand side of the Royal Opera House. Also ‘took the house in’ using the main foyer box office in the evenings.

Like you, not sure of the shooting locations of “The Red Shoes”.