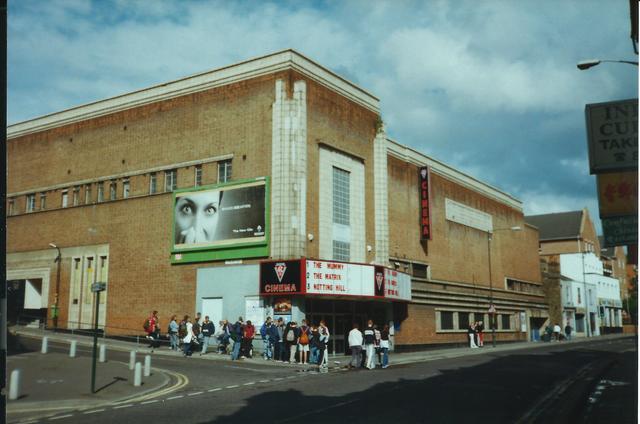 Originally on this site was the Imperial Picture Palace which opened in 1914. It had 1,674 seats and was re-named New Regent Cinema in 1928, reopening with Wee Georgie Wood in “Two Little Drummer Boys” It was equipped with a Christie 2 Manual 8 Ranks organ which was opened by organist Charles Willis. Taken over by Associated British Cinemas(ABC) in 1929, it was closed and demolished in January 1937. (The new Ritz Cinema was located diagonally opposite, and although it was built for Union Cinemas, it too was taken over by ABC).

ABC built a new larger Regent Cinema on the site, designed by their in-house architect W.R. Glen, the auditorium had a particularly finely detailed ceiling. The Regent Cinema opened on 11th July 1938. Seating was provided for 1,115 in the stalls and 755 in the circle. Provision was made in the plans for a Compton organ, but one was never installed.

It was taken over by the Cannon Group in 1986 and re-named Cannon. It later reverted back to the ABC name in a management buyout. The ABC was closed on 3rd January 2002, two of the final films shown "Harry Potter" and "Lord of the Rings" had been playing to sell-out performances.

On 9th April 2002, the building was damaged by three fires, which were considered arson. A further fire set by vandals caused further damage in September 2003. The former Regent/ABC was demolished in December 2003. Retail units were built on the ground floor, with flats above, catering for key workers and the homeless.

A vintage photograph of the ABC in November 1964:
View link
The new block of flats that were built on the site:
View link