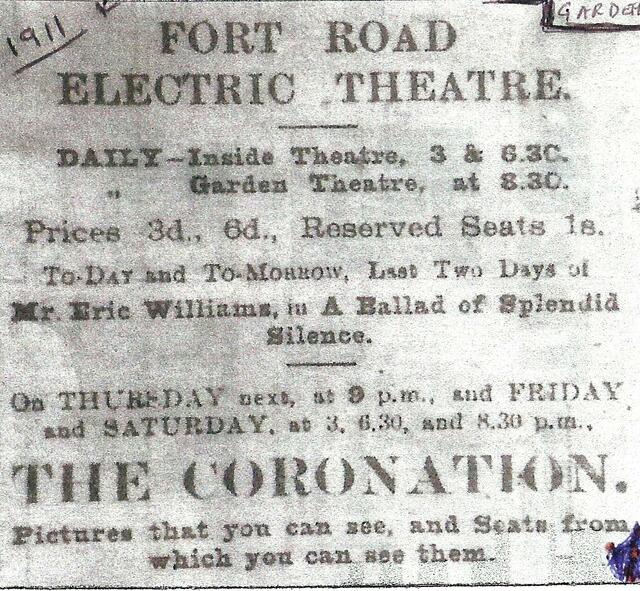 In the seaside town of Margate, Kent, from 1910, a wooden shed, on the east side of Fort Road, used by Whitehead’s laundry, was converted into the Fort Road Electric Theatre.

According to an advertisement, held in the Cinema Theatre Association Archive, shows were presented, rather uniquely, at the “Inside Theatre” at 3pm and 6.30pm and at the “Garden Theatre” at 8.30pm. The advertisement is undated, but has been endorsed “1911”. This ties in with it advertising screenings of “The Coronation”, presumably film of the coronation of King George V and Queen Mary, which took place on 22nd June 1911. (Assuming this was being screened soon after the event, it would be interesting to know how, with shows starting at 8.30pm, the operator overcame the long hours of daylight for outdoor shows at that time of year.)

This very short-lived cinema closed in 1914. (Ironically, that year, it appeared in the Kinematograph Year Book. It was listed as the Picture Theatre, but with no further details.) ‘ The site, just down from the junction of Fort Road and Fort Hill, was being used as Fort Road garage by 1925, and much later, by the 1970s, by Richmond Motors. The area has since been subject to ongoing redevelopment, with an outdoor arts and crafts market being one of the most recent (2018) occupiers.