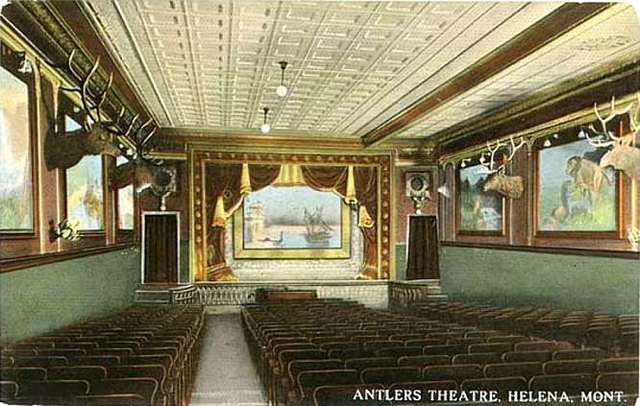 Antlers Theatre can be traced back to at least 1918 by ads in the Helena Daily Independent but the Helena History website puts its beginning back to 1914. Its interior was most notable for its outdoor murals and mounted deer heads.

For many years it played B movies, mainly westerns, leaving the first runs to the Marlow and Rio/Vigilante. The Daily Independent noted in later issues that it was closed during the war years.

From February to May of 1946, while managed by Fox-Intermountain, it underwent a remodeling and seating was reduced to 420 to create a more luxurious theater. The purpose of the renovations according to Fox was to design a compact deluxe movie operation. At the time Fox owned the other two theaters in Helena. The new Antlers Theatre, now billed as a first-run house, opened on May 21, 1946 with Joan Leslie and Robert Alda in ‘Cinderella Jones.’ The newspaper said that neon lighting and glass brick were important elements of its new design theme.

On July 24, 1950 an ad on the theater page said that they would be open only on Friday, Saturday and Sunday as a temporary policy. After being closed for a while, an ad on November 7, 1952 announced their grand re-opening, with ‘Top First Run Attractions.’ Their re-opening appears to be short lived as the theater was closed by early January of 1953 probably due to the opening of the remodeled Vigilante Theatre.

On February 25, 1954 the Helena Independent-Record announced the opening of the remodeled Diana Shops in the former Antlers Theatre at 16 North Last Chance Gulch.

On February 26, 1967 a fire swept through a nightspot, the Bank Club, destroying the adjoining business including the Diana Shops, home of the old Antlers Theatre. The burned out buildings were later turned into a parking lot and today the Gulch is a pedestrian walkway, lined with shops, restaurants and hotels.

Found an address of 16 North Main, what’s the difference?

Thanks, seems like a strange thing to have done?