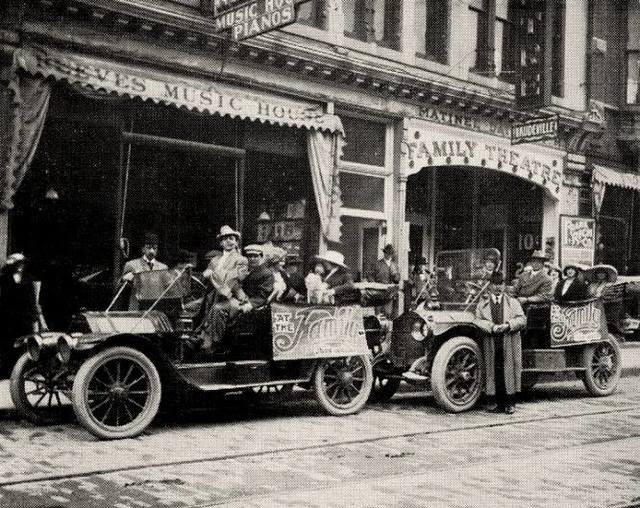 The entrance to the Family Theatre was located at 21 S. Main Street (now renamed). The second story of the building, which still stands, was once home to Ida’s Rooms– later Dorothy’s Rooms – famous bordellos. The Windbag Saloon now occupies the adjacent Reeves Music House space. Although the Family Theatre entrance was on Main Street, the theatre itself was the first floor of the repurposed St. Louis Hotel, which backed up to Jackson Street.

In the above circa 1916 photo, the poster in front of the theatre touts the Frank Rich Musical Comedy Company, members of which are likely in these placarded automobiles, preparing for a publicity ride through town.

Shortly after this closing, Helena dentist Dr. Edward V. Cabbage (he later changed his last name to Bethel) opened a movie theatre in the ground floor space, and had a dental office and apartment above. In 1925, his office and apartment were severely vandalized during his absence by a gang of boys.

History source for the Family Theatre.
Still need to find out the name it took when it began showing films in 1919.

Going Clear: Scientology, Hollywood, and the Prison of Belief, by Lawrence Wright, says that when Scientology founder L. Ron Hubbard’s family moved to Helena when he was two years old, his father became the manager of the Family Theatre, then still a vaudeville house.

The street has been renamed. The current address is 21 S Last Chance Gulch St. It is now an art gallery.