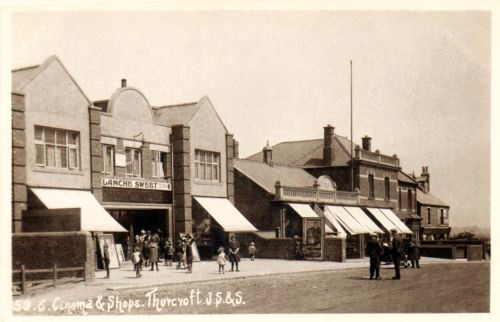 Located in Thurcroft, near Rotherham, South Yorkshire. The Cinema House was operating by 1937, and opened in late-1919. The entrance was flanked on each side by a shop.

According to The Bioscope of 13 January 1921, the cinema at Thurcroft had opened recently. It was said to accommodate ‘about 1000’. The KYB 1931 shows it had an ‘Edibell’ sound system. It was a Morrison system in KYB 1935 and BTH in KYB 1947. Edibell, incidentally, was the Edison Bell Co Ltd known mainly for its records up to the early 1930s when the company folded. Its horn speakers for cinema were designed by Paul Voigt - a name known to aficionados of hifi loudspeakers. The company was not, as is sometimes claimed, a subsidiary of the US Edison company.