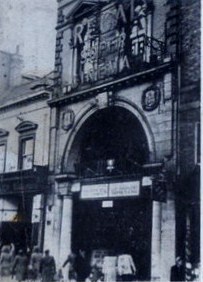 The Picture House was opened on 18th January 1915 with “The Fighting Strain of Old England”. The cinema was constructed on the site of a former high-class grocery store, and the original facade was retained. The auditorium had a barrel-shaped ceiling. Seating was provided in stalls and circle levels, and there were side boxes along the walls at circle level. The proscenium was 31 feet wide. There was a cafe located on the ground floor, where patrons could eat and drink, while watching the film programme.

It was taken over by the Associated British Cinemas(ABC) chain in 1930, and after a refurbishment, re-opened as the Regal Super Cinema on 12th January 1931 with Conrad Nagel in “A Lady Surrenders”. The re-opening ceremony was attended by film star Dodo Watts. The cafe was moved upstairs, and it had an open balcony overlooking the High Street.

ABC closed the Regal Cinema on 26th February 1966 with Julie Andrews in “Mary Poppins”. It was demolished in April 1969, and a Littlewoods store was built on the site. Today, it operates as a Primark store.