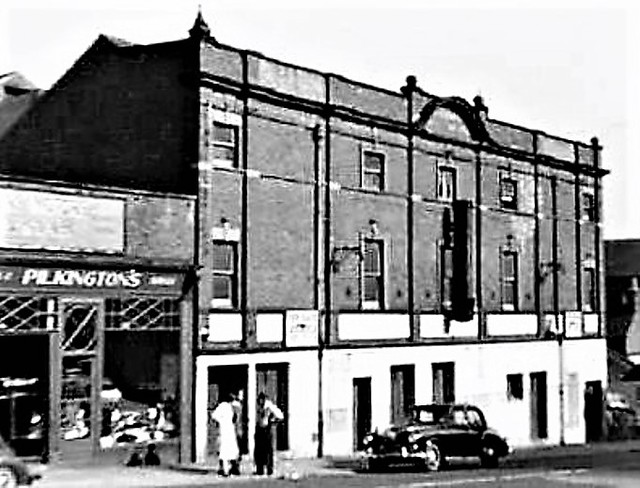 Located in Chesterfield, Derbyshire. Originally on the site was a tin hut type of building, which was named the Theatre Royal. It opened in 1886 and presented music hall. In May 1896, it was replaced by a permanent brick built theatre designed by Rollinson & Sons, which continued the music hall tradition. By 1905, it had become part of the MacNaghten Vaudeville Circuit. Soon films were introduced as part of the variety programme.

The Theatre Royal was taken over by new management and was re-named Hippodrome Theatre from 11th November 1912. Films were presented on the Bioscope, and it is thought the projection box was at the rear of the stage.

In 1922, theatre architect Bertie Crewe designed a new interior for the theatre. The rather plain exterior was retained. It now had a 30 feet wide proscenium and re-opened on 3rd September 1923 with the revue “The Pin Wheel” live on the 28 feet deep stage. There were eight dressing rooms.

In August 1930, it was equipped with B.T.H. sound equipment and became a full time cinema from 8th September 1930, when the film “The Hollywood Revue featuring Jack Benny, Buster Keaton & Joan Crawford was screened. Occasional use was made of the stage during the next few years.

In 1938, it was taken over by new management and reverted back to mainly live theatre use. The Hippodrome Theatre was closed in 1954, and after years of dereliction and vandalism, was demolished. An underpass was constructed on the site.

Can anyone shed light on whether it was on the right-hand side of Corporation Street or the left-hand side, when walking up the road from the station? It is puzzling that this article states that it used to be called Theatre Royal, as an article in the ‘Derbyshire Times’ of 1857 states that the Theatre Royal was located at Theatre Yard, not Corporation Street. Again, can anyone shed light on this discrepancy?