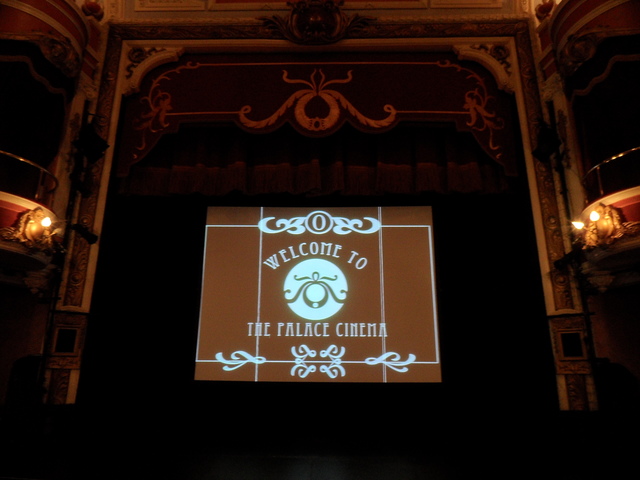 Located in Westcliff-on-Sea, Essex (close to Southend-on-Sea). Opened on 21st October 1912 as Raymond’s Palace Theatre. It was built for and operated by Mr Raymond of the Raymond Picture Company, who operated 14 other cinemas and theatres. It was designed by architectural firm Ward & Ward of the Strand, London, and originally had a seating capacity for 1,500, in orchestra stalls, dress circle and balcony levels. There are also pairs of boxes at dress circle level which have onion-dome plasterwork canopies. The proscenium is 26 feet wide, and there are four dressing rooms.

On November 14, 1912 it was re-named New Palace of Varieties. In 1919 it was taken over by new owners with the view of converting it into a cinema, but the rake of the circle prevented a projection box being built at the rear. Instead, a projection box was built at the rear of the stage, enabling rear projection, and the Palace Theatre began screening films as the Palace Cinema. It operated as a full-time cinema from 1930 to 1932, and had some cinema use again in the late-1930’s.

Over the years has mainly been used as a live theatre, for repertory companies and ballet, as well as know name stars such as Ivor Novello, Sir Henry Irving and Sybil Thorndike appearing.

The Palace Theatre was renovated in the 1960’s, and in 1982 a 100-seat Dixon Studio Theatre was built adjacent to the main theatre. In 1987 the original theatre auditorium was refurbished to its original Edwardian splendour.

In 2010 the Palace Theatre began presenting films every month on Sundays. For these occasions, a temporary screen, projection and sound equipment is installed by volunteers. The Palace Theatre is operated by the Local Authority:Southend-on-Sea Borough Council and is a Grade II Listed building.

As archivist at the Palace Theatre I can clarify its history of screen entertainment. Films were part of the original variety presentations – the opening advert proclaimed “Cinema & Vaudeville: The Best of Both” – but these ended in May 1913, when the theatre went over to weekly plays.

The projection box was at ground floor level, behind the stalls. Between the box and the outside front wall was the rewind room.

Gertrude Mouillot acquired the theatre in 1920. A former actress, and widow of wealthy theatrical entrepreneur Frederick Mouillot, I do not believe she hoped to open it as a cinema. It is my supposition that she converted the then-redundant box and rewind room to other uses, but had a alcove built into the back wall of the stage, so films could be shown using rear projection. In the 1920s these were occasional special presentations, mainly documentaries about adventures around the world.

The theatre returned to live shows, and the next film shows were not presented until May 2009, when local company The White Bus used the theatre for the Southend Film Festival, after which, the same month, they began their regular Sunday film shows with “Burn Before Reading”, starring George Clooney and Brad Pitt. The projection equipment and screen are brought in for each show; the digital projector is flown from the circle front.

There is a full history of the theatre on the Palace Theatre Club’s website at www.palacetheatreclub.org.uk/