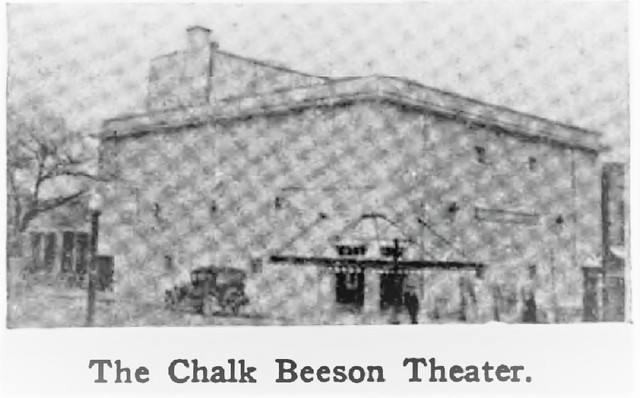 Built as a memorial to Dodge City pioneer Chalkley Beeson by his sons, the Chalk Beeson Theatre opened on December 15, 1915. The boxy, rather plain building housed only the theater, with its entrance at the corner of Gunsmoke Street and First Avenue.

The house prospered with vaudeville and movies until competition from newer theaters, and then the depression, sent it into decline. The building was converted to commercial use in 1935.

Show windows have been installed on the ground floor of the Gunsmoke Street side of the building, but the upper part of the structure remains un-fenestrated, so it might serve only as storage space, or it might be vacant. The fly tower has been removed.

The February 13, 1915, issue of The American Contractor had this item about the Chalk Beeson Theatre:

Merritt L. Beeson operated this theater himself. On the occasion of his visit to Kansas City in 1916, the September 9 issue of The Moving Picture World called his house “…one of the most beautiful and picturesque moving picture theaters in the West….”