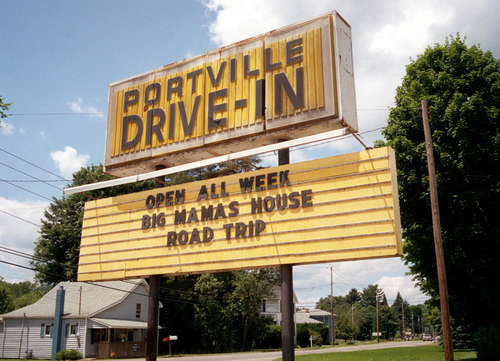 The Portville Drive-In opened July 7, 1972 as a single screen showing Charlton Heston in “Skyjacked”. The second screen was added in 2005. The drive-in is locally owned and operated. It is located on a 22 acre lot which offers unobstructed views. The Portville Drive-In is open seasonally showing first run attractions in Dolby digital projection. Sound is via FM radio.

Despite what its web site says, the Portville opened on July 7, 1972, and the Olean Times Herald said it was owned by the Frontier Amusement Company. According my search at Newspapers.com, the first time the Portville advertised in the Wellsville Daily Reporter was the following Wednesday, July 12.

The Portville wasn’t listed in the 1972-76 editions of the International Motion Picture Almanac. It appeared in the 1978-82 editions with owner “Bordinaro”. That was corrected to Bordonaro by the 1984 edition. All evidence points to the Bordonaro family owning the Portville for a very long time, possibly since it opened.