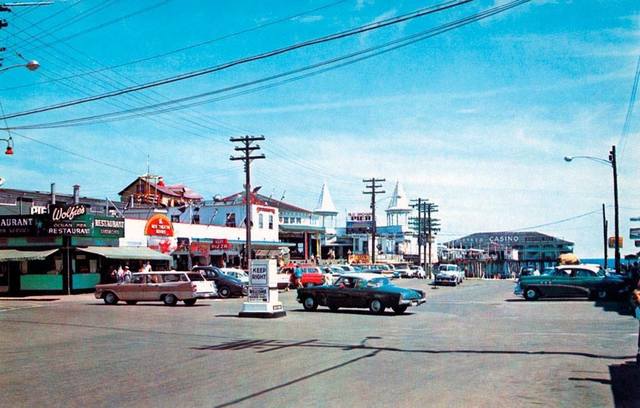 The Pier Theatre was part of a complex built on pier jutting out into the sea. There was a casino, a ballroom which converted into a theatre, and, later, an open-air cinema near the end of the pier. The theatre had a U-shaped balcony which seated about 300, a stage, and a flat wood floor with portable seating. Vaudeville shows were presented, with films coming in later. The theatre historian and author Donald King spent summers in Old Orchard Beach in the 1930’s and attended this theatre. He said that a movie would be presented in the early evening; then the portable seating would be moved aside, a band would come out onto the stage and the ballroom dancing would begin. (Ballroom dancing was very popular in the USA 1910’s - 1950’s). The movie would then be presented again out in the open-air cinema (weather permitting).

The complex was demolished in 1970, although a truncated section of the pier remains.

The Theatre Historical Society archive has the MGM Theatre Report for the Pier Theatre; it'c Card # 421. Address is “Pier Block”. There is an exterior photo taken March 30, 1941. Condition is Poor. The report says that it opened in 1916 (perhaps that’s when movies started, but it actually opened in 1898.) It was showing MGM product, and was a summer operation, with movies and dancing. There were 1,000 seats on the main floor and 300 in the balcony, but I think the main floor held 300-400 seats. The 1940 winter population was 2,500.