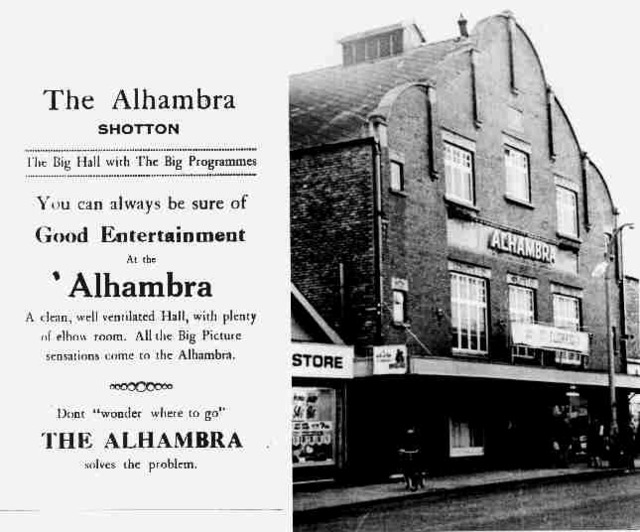 In the small town of Shotton, Flintshire, near Queensferry, John Jones, who moved there from Silverdale, Staffordshire, in 1904, built the Alhambra Theatre in 1919. He built many other houses and shops in the town, and already owned two other cinemas, the Picture Palace in Victoria Road, Shotton, and one in the Co-operative Hall, Queensferry.

At the age of 65 he was architect, surveyor and builder, laying about 2,000 bricks each day. His two sons, Harold and Jack, helped with the building and his two daughters, May and Elsie, made seats and furnishings. When it was completed it had a capacity of 1,200, a large balcony and two boxes, and was the finest hall of its kind in North Wales. It served as a cinema and a theatre.

In November 1936 the Alhambra Cinema passed to Stanley Grimshaw Theatres. The Christmas pantomimes were always popular.

By 1940 it was owned by Alhambra (Shotton) Ltd. while, by 1953, ownership had transferred to Alhambra (Deeside) Ltd. By that latter date the seating capacity had reduced to 915. The entry in the Kinematograph Year Book listed a proscenium width of 30ft, a stage that was 50ft deep and six dressing rooms.

CinemaScope was installed in the mid-1950’s. The Alhambra Cinema also presented wrestling bouts in the early-1960’s, with top stars such as Jackie Pallo appearing. It was closed in 1967.

The building was demolished and a Tesco supermarket was built on the site. That closed in May 1999.