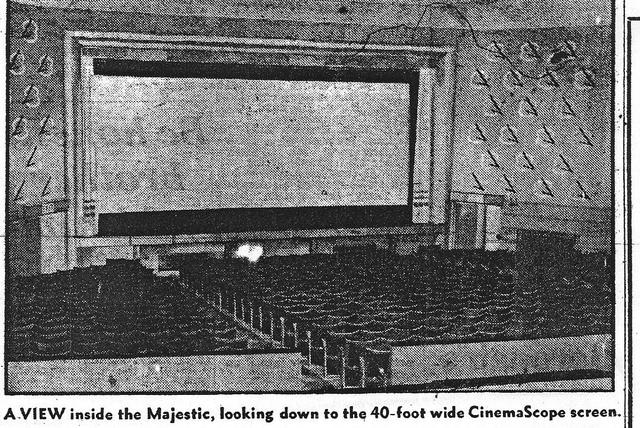 Located in the east of Middlesbrough. The Majestic Cinema was a project of Thompson’s Enterprises of Middlesbrough. Building work commenced in 1939 and the foundations were laid, some lower walls built and some steel work was erected. Work was halted in September 1939 due to the outbreak of World War II.

It was twinned in 1973 with each screen having 400 seats. Soon after it was taken over by the Noble Organisation, who began to operating it as cine-bingo, but this was not successful and full time cinema returned. In 1974, the building was damaged by fire. It was restored, and re-opened again as a cine-bingo operation. Films were dropped in 1975, and it became a full-time bingo club.

In 1990 it was decided the building needed repairing, so the owners set about building a new purpose-built bingo club adjacent to the old building. They demolished the former Majestic Cinema and the site provided a car park for the new bingo club. In 2016 it operates as a Gala Bingo Club.

I have a copy of a newspaper advertising feature for the opening of this cinema in which it states that it was fitted with a 40 foot wide cinemasope screen and equipped with four track stereo sound. Some further details from this feature. It was built in a stadium style similar to the Regent Middlesbrough. Upholstery on the seats and the carpets were deep claret red, which was repeated on each side of the proscenium. Beige and elfin green formed the colour scheme for the ceiling and champagne curtains were appliqued in elfin green and claret. The opening film was Carmen Jones.

Further to my previous comment, the opening date of the Majestic was 8th August 1955.