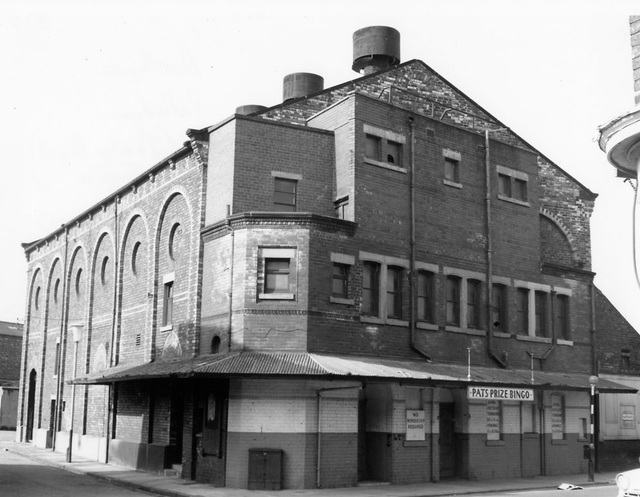 Located in the Old Town section of Hartlepool, County Durham at the corner of Brig Open & Northgate. The 1,500-seat New Theatre Royal was opened on 7th May 1866. It was designed to the plans of architect William T. Harrison. In 1871 it was converted into a music hall (architect unknown). On 1st May 1899 it began operating as the Empress Theatre of Varieties with 1,800 seats. It had a 21ft wide proscenium and the stage was 26ft deep. It was refurbished in 1904. Films were being screened from 1st April 1909. Alterations were carried out in January 1910 to comply with the Cinematograph Act of Parliament and it became the Empress Picture Palace. In 1913 architect F.W. Turner made alterations to the circle seating area. In July 1914 it was re-named Palladium Cinema, opening with “Alpine Soldier” starring Italian actor & strong man ‘Maciste’. From March 1917 it was operated by Thomas Thompson who operated a chain of cinemas in the north of England. In 1932 it was equipped with a Western Electric(WE) sound system and alterations were carried out at this time which reduced the seating capacity to 750.

The Palladium Cinema was closed by Thompson’s Enterprises Ltd. on 6th January 1962 when Hayley Mills in “Whistle Down the Wind” was the final film screened. It was taken over by well known showman Pat Collins (famous for his travelling fair) and for a short time became Pat’s Prize Bingo Club. Last owned by the local council, it was demolished in December 1969.

A number of websites claim the Palladium Cinema opened in around 1871 as the Theatre Royal.