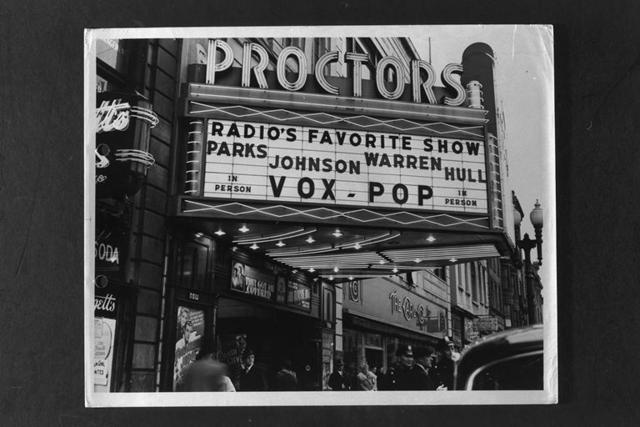 The Art Theatre was opened in 1911 and had 300 seats. It was closed in early-1926 to be remodeled into the entrance to the new Proctor’s Theatre built to the plans of architect Thomas Lamb which opened December 27, 1926 with Bebe Daniels in “Stranded in Paris” on the screen plus vaudeville on stage. The Wurlitzer organ was opened by organist Stephen Boisclair. It operated as a vaudeville and movie house and was home to first run film for decades.

During the 1950’s and 1960’s, Proctor’s Theatre, like so many other theaters, fell victim to the movement out of downtown and its numbers dwindled into the 1970’s when it finally closed.

The Arts Center & Theatre of Schenectady (ACTS) was organized in 1977 and purchased the theatre from the city in 1979 and restored it and reopened as Proctor’s Theatre.

Today, still showing a variety of films, stage shows, and live performances, it is a shining example of the benefits of movie theater revival and re-use.

The 1914/15 American Motion Picture Directory lists the Art Theatre at 432 State Street in Schenectady. Was this theatre demolished to make way for the Proctor’s or was it remodeled?

Proctors Theater was not not demolished. Donald Schein, retired founder and manager of WMHT (local PBS station), volunteered his talents in fund raising to assist Proctors Theater to renovate and to avoid the “ball and chain.” This is a fabulous theater!

1960 photo added courtesy of the AmeriCar The Beautiful Facebook page.

Besides shows great place to see screenings of classic flicks…and plenty of places nearby at which to hoist a few to get in the spirits.

I believe I found the original stage light from this theater in a barn in central Nevada. Their was a note attached to them that said they were from Proctor Theater. They were made by GE and are stunning with mirror reflectors inside. Can anyone point me in a direction of photos of the old lights? I’ll post photos to the page if possible. Thanks for any help.

After browsing around the Schenectady page linked to above, I found several other photos of the Art Theatre that was at 432 State Street prior to Proctor’s. It appears to be the same building in a few of them, so I believe Proctor’s remodeled the existing Art Theatre into their own. I posted only one photo of the Art Theatre entrance in 1913, but there are more available.

Also, the Mohawk Theatre on College Street which was a vaudeville and burlesque venue, ran films for one year it appears prior to closing in 1914. Also claiming to be the first to run an Edison talking film.

Here is a Facebook link to some images of the Art Theater.
I believe it was the same building that Proctor’s moved into.