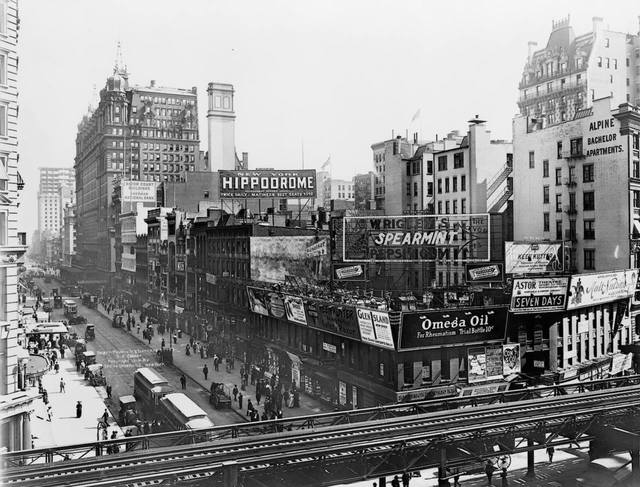 The Hippodrome Theatre opened on April 12, 1905 with “A Yankee Circus on Mars”. Built and operated by Fred Thompson & Skip Dundy, it was a massive 5,697-seat theatre presenting spectacular shows. It was taken over by Edward Franklin Albee in July 1923 and after a remodeling to the plans of architect Thomas W. Lamb it lost 400-seats and became a vaudeville and movie theatre, part of the Keith-Albee chain from December 17, 1923. It was equipped with a Midmer-Losh 2 manual 5-ranks organ, which the company later enlarged in 1924 to a 3 manual 7 ranks instrument. Organist Frederick Kinsley was the house organist from 1921. On August 30, 1926 the Hippodrome Theatre began a policy playing first-run movies with stage shows, the first film to play was Bessie Love in “Young April”. The theatre was sold to property company in July 1930 with a view to demolition to built a large hotel. It was shuttered, and only used for occasional rallies and special events. The hotel scheme was never carried out.

The Hippodrome Theatre was reopened November 17, 1935 with Billy Rose’s circus musical “Jumbo” starring Jimmy Durante and featuring Paul Whitman’s Orchestra. The show ran for 233 performances (six months), then the theatre went dark forever. It was taken over by a sports promoter and used as a first-class basketball court. The building was closed on August 16, 1939, and was demolished. It remained an empty lot until and was used for a while as a bus depot. In 1952, a new building was erected on the site. Today, a plain office building named the ‘Hippodrome’ sits on the site where this massive theatre once delighted thousands.

The Hippodrome Theatre’s scale wouldn’t be replicated until the construction of the Roxy Theatre in 1927.

When I worked in this dreary, non-descript building in the 1980s, the address was 1120 Avenue of the Americas (in case anyone goes searching for the site).

There is a segment in NO BUSINESS LIKE SHOWBUSINESS that takes place in the Hippodrome. Probobly special effects but very well done and showing the water tank effects.

Here is a 1929 photo currently being advertised on eBay:
http://tinyurl.com/rbue7a

A 1939 World’s Fair Guide lists the Hippodrome Theatre as a being a professional Jai Alai venue, the only one in NYC at the time. How long did it last ?

Beautiful shot. Note the Hotel Algonquin in the background.

Here is a photo of the Hippodrome in the 1930s

Despite the influenza pandemic in 1918, New York theatres remained open, according to this New York Times article