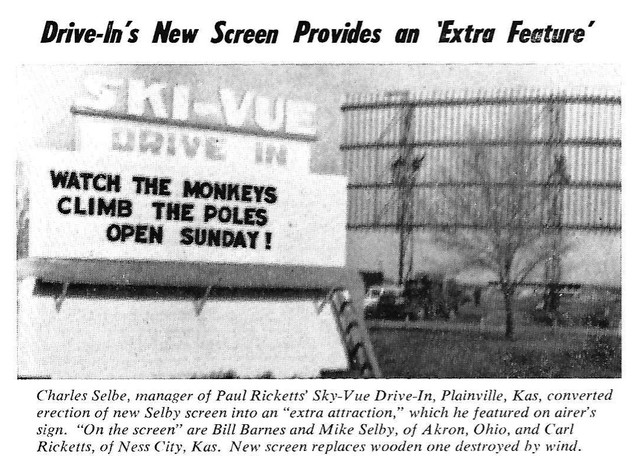 The Plainville Drive-In was opened in 1953. Entrance now Harvest Christian Fellowship Church. The housing behind the church is where the field stood.

The entrance to the old drive-in is still open along 7th street (at least according to Google Maps), but otherwise there is no trace left.

Paul R. Albert’s History of Plainville says that the Ski-Vue Drive-In was opened in 1953 by George Moore, owner of the Moore Theatre, but it soon ran afoul of the region’s notorious wind. Two months after the opening, the screen tower, designed to withstand winds of 80 miles per hour, was destroyed by a 100-mph wind. The stronger replacement tower was destroyed by another windstorm in 1966. A third major windstorm struck in 1973, this one ripping the roof from the concession building, and the drive-in was closed, never to reopen. Plainville continued to enjoy indoor movies for another decade, though, as the town’s venerable Moore Theatre did not go dark until 1984.