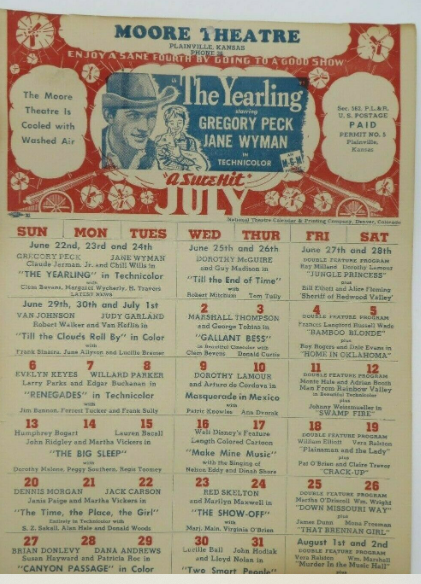 Purpose-built as a movie theatre in 1916 by local businessman and real estate dealer Fred Hoff, this house was generally known as the Hoff Theatre, though an early trade journal photo of it bears the caption Village Theater. One of the two storefronts flanking the theatre entrance housed Hoff’s real estate office, and the other originally served as an office for the theatre itself.

In 1925, Hoff sold the theatre to George Moore, and the house was renamed the Moore Theatre. In 1953, Moore built the Ski-Vue Drive-In south of town, but in 1958 he retired from the movie business, leasing the theatres to Paul Ricketts, an exhibitor from nearby Ness City. Ricketts bought the theatres outright in 1964, and immediately renovated the Moore Theatre with a new front, box office, lobby, foyer, rest rooms, concession stand, flooring, and acoustical tile ceilings.

The Ski_Vue Drive-In was closed in 1973, following the third time it was heavily damaged by a windstorm, but the Moore Theatre continued to operate into 1984. The substantial brick building Fred Hoff erected in 1916 is still standing, but in the most recent Google street view it appears to be vacant.

Uploaded a March 1920 newspaper ad for the Hoff and a 1947 July calendar for the Moore.