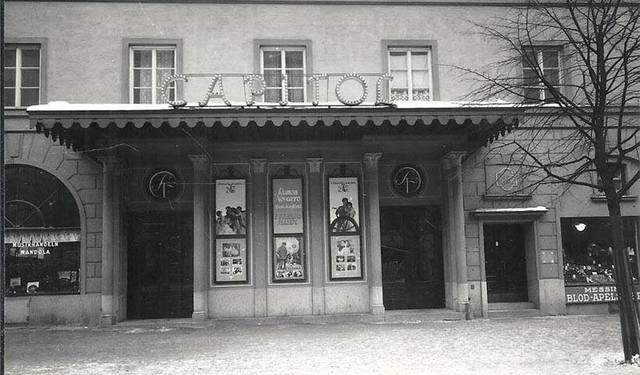 The Biografen Capitol was opened on 31st July 1926 in the Vasastan neighborhood. Seating was provided for 639, with 508 in the orchestra and 131 in the balcony. It was operated by Svensks Filmindustri until 1959. At that time it was equipped to show 70mm films.

It was then taken over by the R-Teatrarna chain and re-named Biografen Ribo from July 1959. In October 1968 it was re-named Ri-Tvaan when it was merged with the next door cinema Biografen Pafageln at #84, which had opened on 24th October 1927 with 300 seats (243 in the orchestra & 57 in the balcony). The Biografen Pafageln became the Ri-Ettan to become a duplex with the Ri-Tvaan. The Ri-Tavaan screen closed as a cinema on 2nd June 1985, by which time it was again operated by Svensks Filmindustri. It became a dance studio and concert venue and the former Ri-Ettan is now a live theatre named Mitteprickteatern (which has its own page on Cinema Treasures).

The Ri-Tvaan was re-opened on 13th July 2018 as the Bio Bistro Capitol, with seating provided for 103 & 81. The two screens are located in the former orchestra & balcony of the former Ri-Tvaan. Screen 1 is equipped with 4K digital and 35mm projectors and Screen 2 has a 2K digital projector. Serving good wine/beers & high end food (no popcorn) in the auditoriums, it has a separate bistro & bar. It screens premieres and repertory programming. There are plans for the future to open two more screens with seating for 17 & 19.