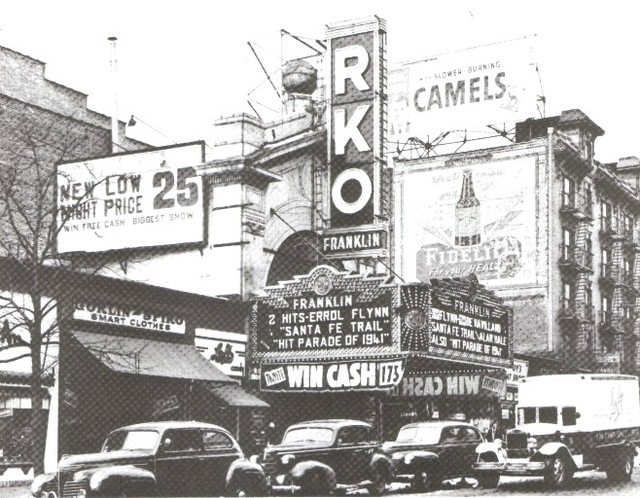 Situated in the West Morrisania section of the Bronx, the Franklin Theatre was one of the largest theatres built by B.S. Moss. It first opened on September 5, 1921, presenting Keith-Albee vaudeville and movies, which explains how it eventually became part of the RKO circuit.

Hard-hit by declining neighborhood conditions, the RKO Franklin Theatre closed in the 1960’s and was converted into a supermarket. Demolished in the 1980’s, it has been replaced by a group of three-story garden apartments.

1954 was a good year for Shelly Winters, she has three films in release at the same time. On the RKO run, “Cry of the City” and in Loew’s theatres “Saskatchewan” and “Tennessee Champ”.
View link

To promote his new film “The Ladies Man,” Jerry Lewis appeared on stage at this theater on July 12, 1961.

During the planning stages (1919) of this theatre it was known as the Atlas Theatre with a planned 3163 seats.

The Franklin is mentioned in the 1935 Clifford Odets play, set in the Bronx, “Awake and Sing!” The family is on its way to see vaudeville at the Franklin when the daughter takes sick on Prospect Avenue, and they return home and realize she is pregnant.

On Friday January 26, they appeared at the RKO Franklin at 9:00 PM.

A 1921 photo as the B.S. Moss Franklin theatre can be seen at this Bowtie website.

The 1937 Film Daily Yearbook (like Cinema Treasures) lists the Franklin and the Prospect as two separate and different theatres. Unlike the Franklin, the Prospect had only 1400 seats and later became the Olympic.