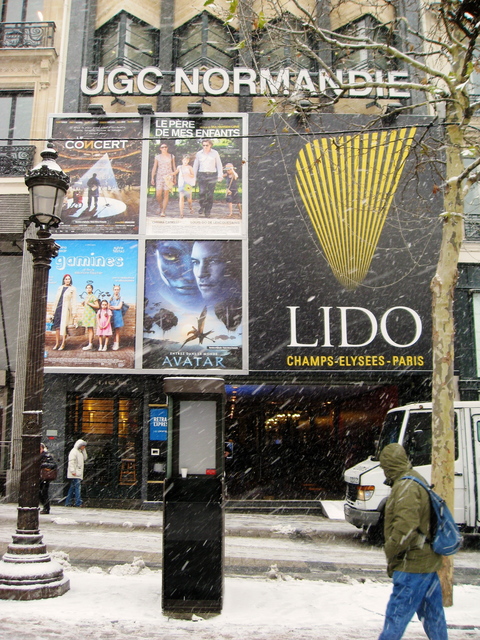 The Normandie opened on the Avenue des Champs Elysees on 4th February 1937 with Flora Robson in “Fire over England”. Flora Robson appeared in person on opening night. It was built in Art Moderne style and had seating for 1,940 (1,277 in the orchestra and 663 in the balcony levels). There was a show before the feature film and special effects could be projected on the bare walls. The ceiling was covered with plaster work. The overall effect of the lighting and decoration, gave an impression of actually being aboard the magnificent ocean liner that the cinema was named after. Initially, the Normandie screened films in their original languages, but from 1938 began playing French films.

One of the first CinemaScope screens in Paris was constructed here for “The Robe” which was a hit.

The theatre kept its original design without alterations up until its closure in 1967. The UGC chain decided to rebuild the theatre smaller, but still remain the flagship of the chain. It took almost two years to renovate the cinema.

It reopened on 4th September 1969 with Claude Chabrol’s “Que la Bete Meure”. The auditorium had 900 stadium seating with comfortable armchairs and a curved shape, and exotic wood panels were used in the balcony. A wide screen 70mm and stereo was also installed. A cosy lobby with bar and marble in the restrooms gave the Normandie the majesty of an old-time movie palace.

In 1969, UGC was sold by the government to an association of French cinema owners. There were two other UGC theatres on the Champs Elysees: the Biarritz with two screens and the Ermitage with three screens. The Normandie remained a single screen.

Many premieres took place at the Normandie like “The Three Musketeers” and “That’s Entertainment” which filled the 900 seat auditorium four times a day for weeks in 1972. More recent premiers have been for “A Chorus Line” and “Schindler’s List”.

In 1978 the huge space under the theatre’s former circle and stage were transformed into the Lido cabaret (1,200 seats) sharing the same entrance.

In 1980 three more screens were added in the next-door building. Screen 2 has 265 seats, screen 3 has 170 seats and screen 4 has 290 seats. In 2004 the 900 seat auditorium after refurbishing (down to 865 seats) is still one of the nicest cinemas of Paris. Films are usually screened in their original language versions.

Closed in March 2020 due to the Covid-19 pandemic, it was reopened in August 2020, renamed UGC Grand Normandie screening “Tenet” presented in 70mm.

Finally made it to the big screen after several years of trying…Saw I ROBOT on opening day at the first show…Great experience comfortable armchair seating with great legroom…Great sound and curved screen…Outdoes the Ziegfeld in New York for comfort even if it is a bit smaller. Also the UGC’s have finally started selling decent popcorn

A secondary entrance on the Champs Elysee:
View link

A night-time premiere at the Normandie in February 2006:
http://www.flickr.com/photos/nicole_hugo/95677002/
Close up of the main entrance advertising:
View link

Saw The Blood Diamond, Zodiac, I Robot, King Kong on the big curved screen…a great place to see a movie