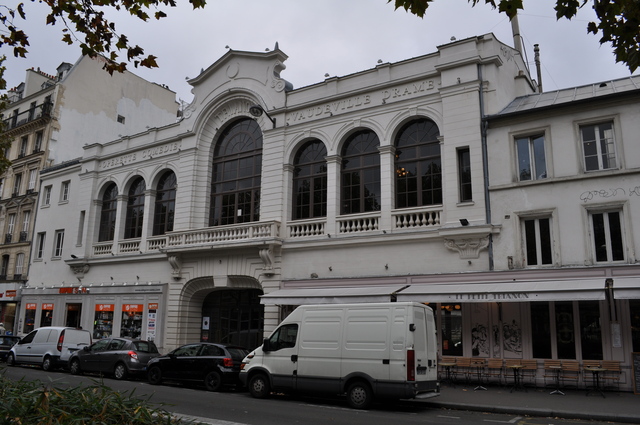 The Trianon was a former theatre of the Elysees Montmartre which included a dance hall and a garden.

It burned down around 1910 and was rebuilt as a live musical theatre, the second important stage of Paris after the Theatre du Chatelet performing “operettes” (French for musicals).

It was converted to movies in 1939 under control of a newsreel theatre chain. The owners never entered the auditorium and didn’t care about the splendor of the auditorium.

The two-balcony Italian shaped auditorium, with a Baroque design, is one of the most beautiful theatres of Paris. It has a spacious stage, a winter garden on the right side, and a huge lobby with two monumental staircases. There is a little balcony for an orchestra.

Around the 1960’s, an independent chain took control of the Trianon and ran popular and B-movies. For a long time it was amazing to see this beautiful place house full, showing karate movies at very cheap prices and all kinds of patrons, some homeless during winter time who would spend the afternoon there.

Each week 20,000 patrons gave the Trianon one of the best results of Paris movie theatres. (The price of a ticket was around a dollar).

But by the 1990’s attendance had decreased, and the owners had the good idea to convert the Trianon to live performances.

The theatre was listed in 1981 and is now a concert venue.