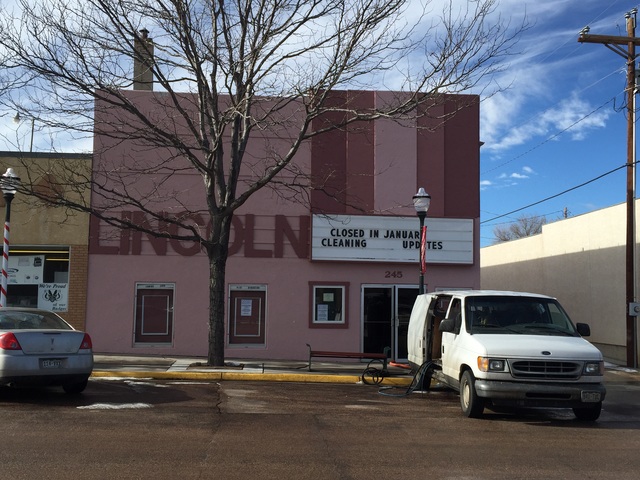 The Cactus Theatre was opened June 30, 1938. Normally a cinema of only 200 seats in a town of 2,200 people would not create much note among theatre historians, but the little Lincoln Theatre in Limon, Colorado is certainly memorable for at least one quality: it is one of the few “reverse” or ‘backwards’ theatres in the world! Turns out that when it was built in 1938, the then owner of this cinema which he called the Cactus Theatre, wanted to save $300 in excavation fees, and so had the simple rectangular building situated so that the slope of the seats was upon the higher grade of the land at the rear, and had patrons enter via front doors on the lower grade at the street level at 246 ‘E’ Ave. Yes, the audience had to go up the aisles towards the rear and turn around to see the movie on the screen since the seats faced that way, of course. This ‘reverse’ format was only used in nine other cinemas in the USA, as far as is known, and in possibly only two in England.

The little Lincoln Thetare could not be called an architectural gem, but its apparently brick construction is solid, having survived a tornado on June 6, 1990 with but cosmetic damage, according to a letter to this writer from the current owner, Marlene L. Steele. It is a simple block shape building with an attraction board built flat against the building after the tornado, and the theatre’s name in five-foot-high letters flat on the “earth-tone” wall adjacent to the fluorescent board. Double plate glass doors are the entry with poster frames for one sheets taking on the remainder of the 1-½-story facade.

The small auditorium has paneled walls with some recent movie posters adding interest as one notices the cut out shapes upon the ceiling and the simple double panel, traveler-type drapery in front of the screen enlivened by changing colored light upon it. The red fabric seats are coped in aluminum and the air conditioning makes even sweltering days seem pleasant. This is how the Lincoln looks, since little is known of how the Cactus looked, since it was sold to others, as is brought out in a letter from Mrs. Steele which reeked of ‘cotton candy’ when I received it in September of 1998:

The Cactus (now the Lincoln) was built in 1938 by Egon WG Wieselman. It was sold in 1945 to John L. Steele, who is not a relative as far as we know. He ran the movie house until 1947 when his son, Johnny Steele took over. Then in 1949 it was sold to Sam Feinstein and Charles McCarthy. They changed the name to the Lincoln Theatre in January of 1950. In 1951, Mr. McCarthy’s wife, Wanna, took over running the theatre and she and her husband were the owners until July of 1984, when my husband, Larry, and I bought and began running it.

In 1991 we replaced the carbon arc lamp houses with used 1961 Strong Xenon lamp houses. Now we are only 30 years behind the times. But they still work great. Last year, with the threat of 6000-ft. reels becoming a reality, we decided to take the plunge and installed a platter. We still have the two projectors, running the previews on one and switching to the other for the movie which is on the platter. Our projectionist is Marianne Johnson. She still makes up the movies for us and takes over when we need to be gone. Someone in her family has been running the booth at the Lincoln for over 30 years, including both her brothers, Marty and Morris.

“The population of Limon is only 2200 people there are only 4500 people in all of Lincoln County [hence the name of the theatre], so we feel very fortunate that we are still able to keep our theatre open. We generally are able to book in movies 6-8 weeks after they open in Denver. And most of our patrons know this, and are willing to wait until they come to the Lincoln. Our prices are reasonable: $4.00 for adults and $2.50 for children. We run four evenings per week Thursday through Sunday. You can still get a soft drink for 60 cents and a bag of popcorn for $1.25. We are very proud of our theatre and its place in our community. We hope to keep it open as long as possible, as it is a labor of love. Sincerely yours”

In a story in the “Lincoln Leader” newspaper by Dan Jennings of Oct. 23, 1997, he points out that they book PG-rated films during the weekends when the high school is in session, and R-rated flicks when it is not so as to serve a greater audience. He quotes Mrs. Steele as to the difficulty of keeping a small, independent single-screen open these days when she says: “The film industry believes a movie screen needs a population of 15,000 to be profitable.” The article continues: “Marlene’s favorite part of running a theatre is knowing when the audience really likes a movie. She can tell this when she hears their reaction while she is working in the lobby during the film.” Maybe that is why her letter smelled so memorably of cotton candy!

Just found the LINCOLN’s one-page web site, with no history section, but a nice photo of the facade. The admission prices have increased slightly, but that appears to be the only change. This is the link: View link

REVERSE THEATRE
This is one of the few “Reverse” or ‘backwards’ theatres in the world, of which 9 were in the USA and 2 in England, of those that are known. This unusual format had the audience entering the front as usual, but the screen was at their backs as they entered, and the projection room/booth faced them! In some cases it was a construction demanded by the topography, as when the land at the rear sloped up sharply at the rear of the building (as with the DARRESS ( /theaters/1645/ ) and the little LINCOLN in Limon Colorado), but for others as with the WHITEHOUSE in Milwaukee ( /theaters/2642/ ), it was purely a gimmick to make the place memorable in competition with the dozens of other show houses in most communities in the ‘golden days!’ The known Reverse Theatres are:

And then there is the FOX Theatre, Taft, CA, ( /theaters/7564/ )where one “entered on the side, the back corner, actually,” to round out our little list of eccentric theatres.

I visited this theater in April of 2007 and saw “Astronaut Farmer”. Much of Mrs. Steele’s information in her letter above is still correct. The lobby is modern and cheery while the auditorium is very nostalgic and beautiful. They still have a curtain that opens and closes before and after each feature. Mrs. Steele was very kind to me and spent a lot of time visiting with me and showing me around. The booth is accessed from a very strange staircase which is more like a ladder. The booth contains two Brenkert projectors…one runs the trailers reel-to-reel and the other runs the feature off a platter system. Before she goes upstairs and starts the lobby, Mrs. Steele goes up front, introduces the film and gives a run-down of the rules and conduct of the theater and the consequences any offender will face.
Very nice presentation quality. This is a fun and historic theater to visit.

The “Theaters Under Construction” column of The Film Daily for April 9, 1938, said that the target date for completion of the new Cactus Theatre in Limon, Colorado, was June 30. The architect for the house was Earle A. Deits of Colorado Springs.

Was there a second (or third) theater in Limon’s history, or just one that was renamed a few times? The evidence I’ve found supports the latter conclusion.

The first reference I could find to a Limon theater was in the Jan. 5, 1918 Moving Picture World: “Sharon Springs, Kan. – Mrs. Henrietta Pope has sold her picture show and has bought a show at Limon, Colo.” Later that summer, that magazine included the Elite Theatre of Limon in its Pershing Crusader Roll of Honor.

The next news I found was from 1928 issues of Film Daily. Sept. 16: “Limon, Colo. – Free shows are presented at the Auditorium here each Saturday afternoon for the benefit of local merchants.” And in the Nov. 15 issue: “Limon, Colo. – The Auditorium 250-seat house owned by John Blair was destroyed by fire, caused by an overheated furnace.”

Someone rebuilt the Auditorium, because it went through some ownership changes in 1931-32, according to notes in Film Daily.

Variety reported on April 25, 1933 that the Auditorium had closed (again).

On Jan. 15, 1938, Film Daily reported that National Theatre Supply Co.’s Denver office supplied “to the Auditorium Theater, Limon, Colo., two Simplex Acme sound projectors complete and Walker Silversheet sound screen”. Which suggests that the theater was being remodeled or rebuilt but hadn’t changed its name yet.

As JimRankin wrote, the theater’s owner at this point was Egon W. G. Wieselmann. A July 13, 1940 Boxoffice note still called it the Auditorium, but an earlier note in the Motion Picture Herald said it was the Cactus.

The rest of my notes confirm JimRankin’s account. On May 5, 1945, Boxoffice wrote, “John L. Steele, rancher, has bought the Cactus Theatre, Limon, Colo., from E. W. G. Weiselmann, who plans to take a lengthy vacation before returning to the theatre business.” By the end of the year, Showmen’s Trade Review noted that Weiselmann was “operating a manufacturing company in Colorado Springs.” And on Sept. 10, 1949, the STR wrote, “Roy Steele has sold the Cactus, Limon, Colo., to Sam Feinstein and Charles McCarthy.”