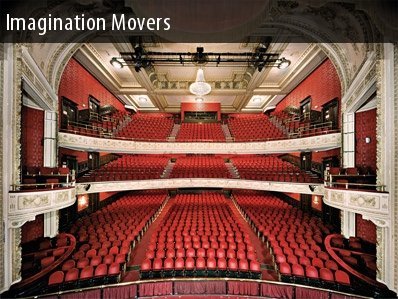 In 1947, promoter John Harms moved to Englewood and, in 1949 and 1950, began to book performers, including violinist Jascha Heifetz and soprano Kirsten Flagstad, at the venue. When the 24,000 sq.-ft. facility was up for sale in 1976, Mr. Harms purchased it for $80,000 and brought in architect Frederick Fox to convert the abandoned theatre into the Englewood Plaza for the Performing Arts. The seating was reduced to 1,280 and the facility provided six dressing rooms, a large backstage area, and ample fly space. The facility became a model for converting a suburban theatre into a modern cultural arts center and centerpiece for a downtown revitalization.

In the late-1970’s, Harms booked such legends as Dizzie Gillespie (an Englewood resident), Sarah Vaughan (a Newark native), and William Count Basie (from Red Bank). After Mr. Harms' death in 1981, the theatre continued to present live performances. By the mid-1990’s, prior to the installation of air conditioning, the theatre was putting on approximately 175 productions annually.

In 1998, the non-profit John Harms Center for the Arts underwent a $6.9 million renovation, which increased seating to 1385 and added new lighting, a new sound system, air conditioning, and a new roof. Later, in the autumn of 2000, the Center unveiled a $100,000 electronic marquee and $170,000 in facade renovations. Unfortunately, much of the cost of the renovations was to be paid for via a New Jersey State Council on the Arts $2.1 million matching grant and $500,000 matching grants from three of the Harms' biggest donors. However, the theatre rarely met its fund-raising goals and failed to receive much of the expected income.

In the aftermath of September 11, 2001, ticket sales fell $100,000 from the previous year and corporate donations were less by $150,000. In conjunction with a 50% cut in the state’s art budget and the massive debt left from the renovations, this loss of revenue led to the theatre’s unexpected closure in April 2003.

In October of 2003, the (again) renamed Harms Hall, now being run by the not-for-profit Bergen Performing Arts Center, reopened with a limited schedule, starting with a series of previously scheduled performances by the New Jersey Symphony Orchestra. The new group persuaded Bergen County Freeholders to provide $1.9 million worth of low-interest bonds and persuaded donors to give an additional $500,000. The Harms Hall resumed a full schedule in the fall of 2004.

Nice to see this on here. My wife and I went to see comedienne Rita Rudner here in the late 90’s. Though the renovations were still being done, the place looked fantastic. We read about the Center’s financial problems and hoped that something could be done to keep this splendid place open and free of the wrecking ball. Glad to see it’s still up and running.

In the late 70’s there used to be a small theatre in the loft upstairs from the main concert hall. We saw some terrific stage plays there. I remember specifically seeing The Threepenny Opera there and was amazed at the quality of the production. Does anyone remember this ? And what happened to that Company ? Thanks for this site .

Listed as a UA Theater in the 1970 Film Daily Yearbook.

Not to forget an often (and often willfully) overlooked period in the Plaza’s history: as a youngster the Plaza was THE place to go for essential trash cinema of the day. I can recall with fondness seeing Larry Cohen’s IT’S ALIVE there when it was playing its initial run in the early 1970’s, dragging my grandmother with me there to see GODZILLA VS. MEGALON (she hated it, no taste), the American – International releases of many of the Hammer horror films played there, and I am still in proud possession of the vomit – bag that was given out with admission to the Hallmark release of the infamous MARK OF THE DEVIL to which my pals and I were gladly admitted despite being waaaaaaaay underage for such mayhem. The Plaza was like a direct outlet from the pages of Famous Monsters of Filmland to the screen in those days, along with being MUCH safer than having to go to 42nd st in NYC. Heck, it was walking distance!

Many years later I took in a wonderful Lyle Lovett show there when I believe it was still the John Harms Center for the Arts, and it truly boggled my mind to walk through that lobby once again. I haven’t been back to Englewood since. 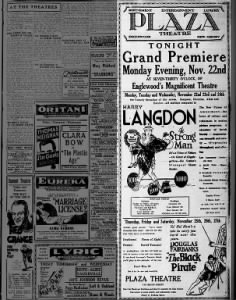