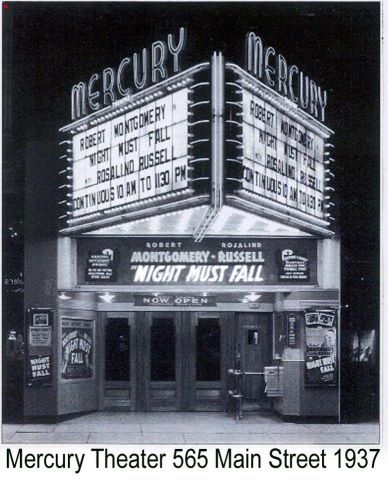 The Mercury Theater was a small, narrow second-run theater. It may have been first run when it was first constructed, but in it’s final days, it ran quality double bills of second-run and revival motion pictures. It was closed in 1953.

The Mercury was opened in 1938 by Dewey Micheals, who also ran the Palace Burlesk. It was
built in an existing 4 story building. The remodeling for the 300 seat theater cost $15,000.
Being downtown, the theater was open all day, initially showing art and foreign films. A few
years later, the Mercury began showing everything, adult films, revivals, B movies, and even
some first run films. In 1953, Micheals said he was closing the theater, even though it
was making some money, the building had been leased to Buffalo Optical. Years later the
building was razed for the Goldome Bank complex.

A small photo of the front of the Mercury Theatre at the local premiere of Lili appeared in Boxoffice magazine, August 29, 1953:
View link