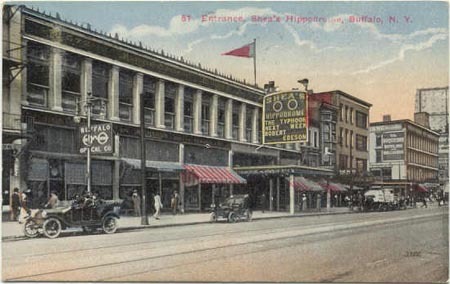 Opened August 31, 1914 with 2,500 seats, Shea’s Hippodrome Theatre was one of the movie palaces along Buffalo’s Main Street. It stood approximately one block south of the Paramount Theatre (previously Shea’s Great Lakes Theatre) and on the same side of the street. In September 1922 it was equipped with a 3 manual, 15 rank Wurlitzer organ.

In the 1940’s it was sold to Loew’s Inc. The building was renovated to the plans of architect Michael J. DeAngelis, when the original marquee had been removed and replaced with a more ‘modern’ style marquee with the name “Center” on it. It reopened as the Center Theatre on on August 31, 1949. The foyer was also given a ‘modern’ treatment to the plans of interior designer G. Brandt.

The theatre’s balcony was neglected and dark during the late-1950’s and 1960’s. As a result it was difficult to see any of the details of the theatre’s design.

During the 1960’s, the Center Theater was the house that ran almost all of the Warner Brothers / Seven Arts / Hammer films. In December 1968 it was converted into a triple-screen movie theatre and was closed in 1975. It was demolished on March 27, 1983.

My Grandfather was the first orchestra director at the Shea’s Hippodrome,according to his obituary in the Arts Journal. His name was George A. Bouchard,(organist), my Grandmother Mary Bouchard also sang there.(Opera) Do you have any musical information about the theatre or about the performances. I would appreciate it.
Sharon M.

I visite the projection booth in this theatre in May 1967. They were showing “Hombre” with Paul Newman. The booth was tiny,built up on stilts with a steep steel ladder for access. They had two Century JJ-2’s and a third Simplex XL with an RCA 9030 soundhead. All 3 machines had Strong lamps burning 11mm positives. At that time the Buffalo local still had a two man booth in the downtown theatres. It was cozy up there.
Bob Throop

When the Center became a triplex,each theater had a name. There was the Center, Backstage,and Penthouse.

The “REAL” Mighty WurliTzer Theater Pipe Organ for this theater was Opus 585, a 3 Manual/15 Rank organ, shipped on September 29, 1922, a whole 17.9 miles, from the WurliTzer Headquarters in North Tonawanda, New York. The last anyone knows, in May of 1957, the organ went to a residence in Niagara Falls, Ontario, Canada and was still playable.

After they carved up this house into 3 theaters, I think the last moment of its glory was their booking, first run, of “Woodstock”. They ran it in the largest theater, and charged what was a truly exorbitant price — I think it was $6.00 — which I finally coughed up since I didn’t get to go to the festival. This film should have been run at the Granada — the sound was poor and the facility was cramped — but the haze in the theater was amazing!

In it’s prior incarnation as a single screen theater, I always marveled at their continued usage of multiple curtains – as did many houses for years in the area. Projection would start off on the solid house curtain which opened to reveal a see-through light curtain which was held in place until the main feature started up. Then it too opened to a clear picture, with all side travelers in place for perfect framing. At film end, the light curtain closed on the credits, then the main curtain as the lights came up. Try finding that today……………

When they made the theater into 3, you could buy a pass to wander from theater to theater. You didnt have to stay in just one show.

Some later Hippodrome history starting in 1938, when air conditioning was added. The last live
entertainment was in 1941 (Major Bowes), and during the war years admission went from 25 cents
to 40 cents. Also during this period, the “Hipp” and the Buffalo were sold by the Shea Estate to
Loews Chain and Vincent Mc Faul, for $2M. After this big movies that opened at the Buffalo, then
went to the Hippodrome. In 1949, as stated the name changed to Center and a redo took place. Also live entertainment returned for a period, including Nat Cole and Peggy Lee. In 1952, a closed
circuit opera was shown, and in 1952 “The Greatest Show on Earth” attracted 60, 000 patrons
in 3 weeks. A Marciano fight at $3 a head was also shown in this period. Buffalo’s first 3-D
movie “Bwana Devil” also shown here. The late 50s and 60s brought decline, and the division
into 3 theaters in 1967. Closed in 1975, demolished in 1983,

My great-grandparents were entertainers at this theatre and many more from what my great Uncle Johnny Bouchard put in writing for us. I see Sharon M., stated he was her grandfather and an orchestra leader. George Albert and Mary Elizabeth Bouchard performed all over the states according to the writing. They were friends with the police commissioner, mayor as well as many residents of Buffalo. Mom has pictures of them in performances and we will scan and add at a later date. They left a long legacy of children, grand and great and great-great grandchildren to remember them. Please if anyone is interested please write to us or call. Bonnie White at or 909-583-3017. We have been doing ancestry.com which has led me here. Thanks