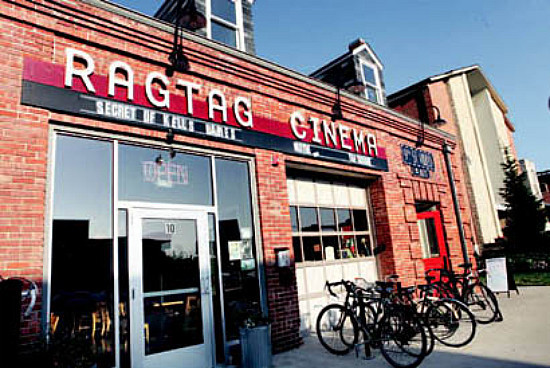 Opened in 2001 this single screen theatre is a cinema cafe located in the thriving downtown section of Columbia. Their motto is “A theatre without a beer is just a museum”. The Ragtag Cinema plays independent films. They also have art shows at the theatre and are co-sponsors of the Missouri Theatre Film Series at the Missouri Theatre down the street. They also hold film festivals at the Ragtag Cinema.

Here is the homepage:
http://www.ragtagfilm.com/

This theatre is the inspiration of the great Moxie Cinema in Springfield, Missouri.

MY GCC manager’s dark blue coat would be called RAGTAG right now.Wonder if they would want to display it.

The name is, I believe, a reference to the organization’s origins. It began as a film series without a permanent home specializing in foreign and classic films. Most films were shown at the Blue Note. Eventually a few were also shown at the Missouri Theatre, beginning a lengthy collaboration. It was perhaps several years later that they opened their own cinema at it’s first location on 10th Street, and another five to ten years before they moved to their current location.