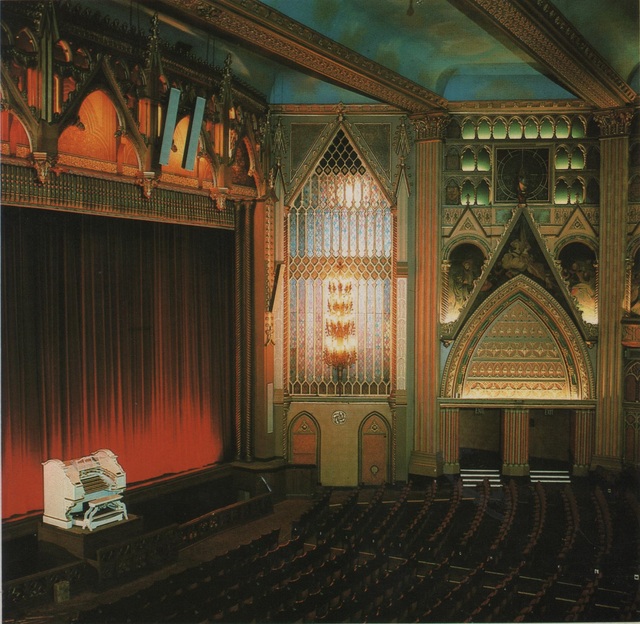 Located in the south London district of Tooting. The Granada Theatre opened on Monday 7th September 1931 for Sydney Bernstein’s Granada Theatres and became the flagship of the circuit. The opening feature film was Jack Buchanan and Jeanette MacDonald in “Monte Carlo”, supported by “Two Crowded Hours” a 43 minute short drama film starring John Longdon and directed by Michael Powell. Completing the film presentations were “Oh! Oh! Cleopatra” a short from Masquer Club productions and a surprise showing of the 1907 version of “Ben Hur” with William S. Hart which had a 15 minutes running time and was shown to let the audience see how motion pictures had improved. A special edition of the Paramount Granada Newsreel was also screened. Jack Buchanan was unable to attend the opening but he sent a special screened message. Over 2,000 people were turned away on the first night!

The architect of the building was Cecil Masey who designed a Moderne Italianate styled towering entrance with four tall pillars topped by Corinthian capitals. The entire interior decoration of the theatre was designed in a Gothic style by famed Russian stage set designer Theodore Komisarjevsky. On the side walls at balcony level are a series of panels with painted murals of medieval figures painted by Alex Johnstone from small originals by Lucien Le Blanc.

The stage is 58ft wide and 30ft deep and has a fully equipped fly-tower. It has a Wurlitzer theatre organ with a piano attachment on the stage. Originally a 4 Manual/12 Ranks instrument which was opened by organist Alex Taylor. The instrument was originally installed in 1926 in the Majestic (later Mission) Theatre, Sacramento, California, USA as a 3 Manual/10 Rank instrument. In 1932-33, the instrument was enlarged to be a 4Manual/14Ranks specification, which remains today. The organ chambers containing the pipes are located under the stage. The projection room had 3 Ross projectors, a Master Brenograph and two Brenkert spots. The cinema was equipped with a Western Electric(WE) sound system. There was also a café located over the entrance, which gave great views of the magnificent foyer. It had an ‘all electric’ kitchen. The café was closed by 1954, and the space has been unused since then. The Granada Theatre has a large car park which could accommodate 250 cars and also originally had a pram park for mothers with children!

The Granada Theatre played mostly films on the Gaumont circuit release, but occasionally obtained Odeon circuit release films. In 1948, the stage was brought fully into use when productions of “Goodnight Vienna” starring Bruce Trent, and “The Dancing Years” starring Barry Sinclair both played for one week runs. From January 1934 and at this time of year for the following four years, a circus (with real elephants) took to the stage supporting the film programme. From 1936, pantomimes were also staged, usually for two week runs around Christmas, and these continued into the early-1950’s.

With only an average audience of 600 patrons a week attending by 1971, the writing was on the wall and applications were made to demolish the theatre to build an office block. The local Council stepped in and served a local preservation notice on the building. This eventually led in June 1972 to a Grade II* listing being placed on it by English Heritage. However this didn’t help the fate of the theatre as in July 1973 a heavy storm flooded the front stalls seating area and damaged the Wurlitzer organ organ chambers under the stage. The Granada Theatre closed suddenly as a cinema on 10th November 1973 screening Richard Crenna and Stephen Boyd in “A Man Called Noon”(aka Un hombre llamado Noon) and Ursula Andress and Stanley Baker in “Perfect Friday”. The following weeks' advertised film was Clint Eastwood in “The Good, The Bad and The Ugly”, but patrons turned up that week to find notices in the display frames stating ‘Due to a lack of public support this cinema is now CLOSED’.

It remained closed and unused for almost three years until it re-opened as a Granada Bingo Club on 14th October 1976. Taken over in May 1991 by Gala Bingo it remains in operation today.

On 28th September 2000, the listed status of the Granada Theatre was upgraded to Grade I by English Heritage. This is the highest Grade Listing that any building in the UK can receive and it puts the Granada Theatre on the same scale as the Tower of London, Buckingham Palace, Westminster Abbey, Stonehenge etc. It is the first 1930’s cinema building to be given this honour.

The Grade I Listing gave the owners (Gala Bingo) more clout to apply for public funding to maintain the building and work was completed to ‘open up’ the orchestra pit again (long covered over by the bingo callers podium) which blocked the sound of the organ which has its chambers under the stage.

Restoration work on the Wurlitzer organ was completed in Spring 2007 and the first public concert since the early-1970’s was held on 22nd April 2007. Sadly, the under stage organ chambers were flooded in July 2007, when heavy storms hit London. Again, repairs are currently being carried out to the instrument.

In Autumn of 2018 the Gala Bingo chain was rebranded Buzz Bingo.

Historic photographs of the Granada as a cinema, and its Wurlitzer organ console:
http://www.ukwurlitzer.co.cc/1523.html

I visited the old cinema in 2011 and was given the run of the place – the manager was very nice and bought me some chips! The staff and most of the patrons were friendly. I was very impressed with the place. I have written about my visit and this may be found at the PLAYING BINGO website:

and a series of photographs may be seen at:

I am working on my account of my several visits to the Granada/Gala Woolwich where I was also given free-range to the place.

Lovely to see it today as part of the Annual ‘Open House’ event. Amazing so much survives, though it could do with some refurb. Best of all a chance to see the beautiful Wurlitzer. Hope they get the money to restore it again after the flood.

On a related topic, I’m researching a book about a man who was prosecuted in 1936 for having sex with a 16-year-old usher from the Granada Tooting. They made contact in the cinema and arranged to go to the Strand Palace Hotel. The lad in question had been posing for 2 – 3 years for nude pictures for ‘connoisseurs’, so was obviously experienced and this seems to be a little bit of a ‘vice ring’. What I’m wondering is whether this kind of thing was common. Whether cinemas and ushers/usherettes were known for this in the 1930s in the way that Music Halls were in the 1870s-90s. Anyone got any information?

Homopromos:Pleased to hear you enjoyed your ‘Open House’ visit to the former Granada Theatre today. I was one of the 3 tour guides on duty, so not sure if you were on one of my tours of the building.

The 1936 story is new to me, but I am sure there could be other similar tales, long lost in the annuls of time, or never disclosed and covered up forever.

I am at present researching the company George Jackson & Sons and according to their list of work done they did some of the decorative plaster work on the Granada together with Clerk & Fenn. Can anyone confirm which parts they worked on? Also may I use the photo on this page if it is relevant to the work they did?

My mum was an usherette at The Granada in the early 50s. I know she had some photos taken there with the other usherettes in their uniforms and with John Wayne. Is there any chance some of the photos have been kept somewhere?

Did the organ block the view of the screen, when movies were screened there?

The organ is on a lift it would be down while films were on the place opened after sound films had arrived even so the lift would be down if played to a silent film.

new article on this most exotic movie palace https://www.londonnewsonline.co.uk/story-of-one-of-the-most-lavish-cinema-houses-in-england-the-gala-in-tooting/