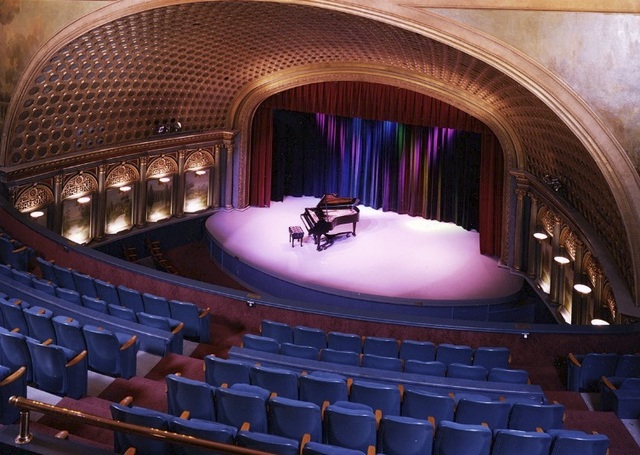 Opened February 22, 1915 as a movie theatre called the Clemmer Theatre. The opening movie was Mary Pickford in “Mistress Nell”. Designed in a restrained Neo-Classical style by noted theater architect Edwin W. Houghton, the Clemmer Theatre originally sat 800 patrons and boasted a 4 manual, 32 rank Kimball organ which was opened by organist W.H. Donley, one of the most impressive instruments in the city. Among the Clemmer’s first musicians to helm the organ was Jessie Crawford, eventually recognized as one of the great silent film organists of all time. By 1929 the Clemmer Theatre was operated by the Universal Pictures chain.

In 1988, the movie house underwent a substantial restoration and the building eventually became known as the Metropolitan Performing Arts Center, or “Met”, for short. In 2006, the theatre was renamed Bing Crosby Theater.

From the Met’s Web site:

Built in 1915 by local developer August Paulsen, the Old Clemmer Theater was considered state-of-the-art in its day, seating nearly 800 patrons. The theater represents a turning point in mass entertainment, when vaudeville was relinquishing top billing to silent films and the era of lavishly embellished movie palaces was about to begin. Designed by noted theater architect Edwin W. Houghton, The Clemmer embodied the restrained Neoclassicism of these traditional movie houses. It would come to be known as The State Theater in later years. Inland Northwest residents lined the streets in anticipation to see “Casablanca,” “The Godfather,” “Gone With the Wind” and thousands of other first-run movies.

When this theatre was known as the State Theatre it was operated by Evergreen State Amusement Corp., which was part of the Fox Theatres chain and later known as National Theatres then National General Theatres.

This a.m. on CBS Sunday Morning they did a segment on what will be called the Bing Crosby Theatre which is now the Metropolitan Performing Arts Center. The following article gives details of the plans for the name change. View link

Bud Schmidt of the State at Spokane, Wash. used the “girls only” gimmick to get a running start with “Yellowstone Kelly”. Billing it as the “Kookie Matinee”, Schmidt had 350 avid fans of Edd “Kookie” Byrnes waiting at the box office when it opened at 10 a.m. The promotion was carried out with the city’s top-rated teenage radio station.

Pretty crazy, Bing actually dated my great grandmother Florida who was also a singer and a dancer at the met theater. He had his ACTUAL first born son in this relationship. My grandfather who ended up with the last name Scott instead of Crosby because he had left.

This is pretty crazy, all right. Bing went on a date with my grandmother, too! Turned out to be a fizzle. Years later, right about her 100th birthday, they named the theater for the guy. My grandmother always insisted on calling it the Clemmer.

Functions should also include: Movies (classic and independent)

Grand opening ads for the Class “A” and the Clemmer theatre 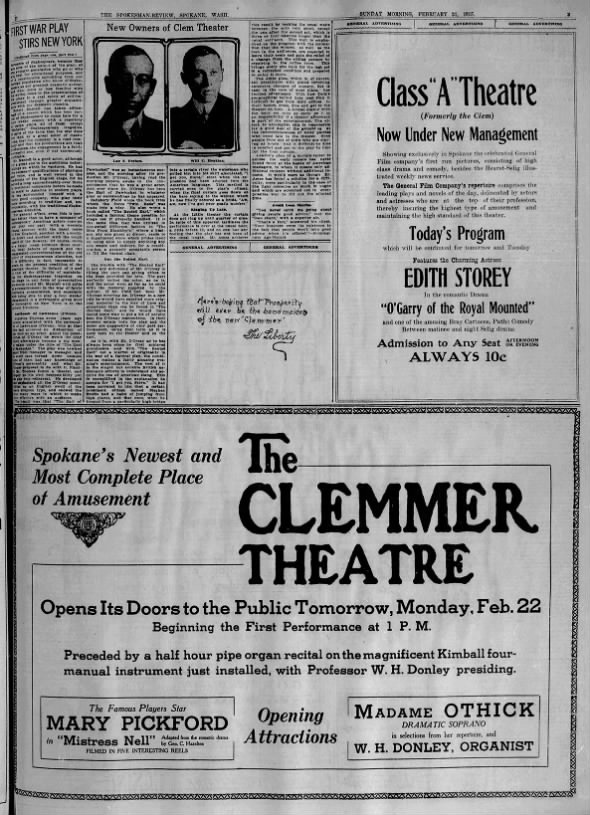