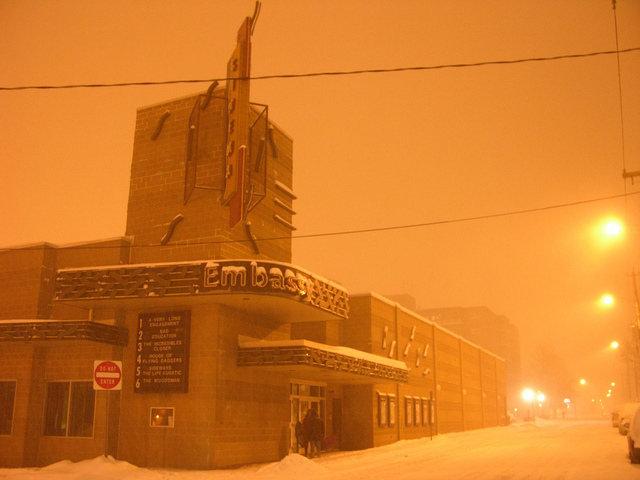 Opened on May 22, 1998, Landmark’s Embassy Cinema is a rarity for this region: a brand-new multiplex in the heart of a suburban town center, a short walk from numerous restaurants.

The Embassy Cinema shows a mix of mainstream, foreign, and art films. Some of the bookings are shared with Landmark’s other Boston-area theatre, the Kendall Square Cinema in Cambridge.

The Embassy Cinema is named after a former single-screen theatre that was long ago located in the same area. However, I don’t think the new Embassy Cinema occupies the exact same spot as the old one.

There is a small walkway leading to the Embassy Cinema from Moody Street with an archway that says “Embassy” (across from Margerita’s restaraunt) and that may be the location of the original Embassy…?

Some photos of the Embassy Cinema, mostly inside the projection booths and film preparation areas.

The caption “in the same area” is correct. The original was on Moody, where there is now a vacant lot. Behind the vacant lot, is the parking garage for the new Embassy, which is around the corner.

The original Embassy has it’s own listing,

(Sorry, I didn’t click the link to the photo with the caption, just read the description at the top of this listing.)

The new Embassy was built on the site of the former Waltham New-Tribune building on Pine Street, just a block up from Moody. The old Embassy was indeed nearby on Moody Street, across from the former Grover Cronin department store, now the site of a condo complex (the Grover Cronin facade was preserved). The site is now the vacant lot that breaks up the block between Pine Street and the Charles River. The last film to play at the original Embassy was “The Last Picture Show,” I recall, but the theater actually closed with a gala performance by Guy Lombardo and his Royal Canadians band of New Year’s Eve fame.

Why was the old Embassy torn down? Was some development supposed to happen on its site, but never did?

As a resident of Waltham from 1958 to 1979, who attended the old Embassy Theater many times in my formative years, I can attest that the posting by bclarrk on 8/15/2005 is correct.

The former Embassy Theater was located on Moody Street, directly across the street from the block where the former Grover Cronin’s department store once stood. What may be stated correctly, however, is that the parking lot for the current Embassy multiplex theaters shares roughly the same space as the parking lot for the orignal Embassy. Furthermore, the current Embassy is on the same city block as that of the original Embassy facility.

In fact, I recall many times entering the old Embassy from that back entrance/exit, and even it had posters of coming & current attractions and a ticket-selling area, though it was chiefly used to exit more quickly after a film had ended, and to gain quicker access (& escape) for the theater’s automobile-driven patrons.

What actually exits on the former Embassy lot is one of those rather useless municipal monstrosities, marked by a few benches and a mural, I believe done by some students of the Waltham Public Schhools on the side of a building—to my recollection anyway. The functional purpose of this site is as a cross-over to the parking lot and a recreational area along the banks of the Charles River, adjacent to which is also some public housing, I believe occupied by some of Waltham’s senior citizenry.

The previous comment that the current Embassy is situated where the former “Waltham Daily News-Tribune” once stood, on Pine Street, is likewise correct. The current “Tribune,” which last I heard is on Moody Street after a period operating in the Rte. 128 area, exists in name only; was aborbed by the Johnson family-owned Fidelity Investments group, which operated as “Community Newspapers,” was then was bought up by the current “Boston Herald.”

Also, bclarkk’s comment about Guy Lombardo’s band being the last official engagement booked at the original Embassy, rings true. I recall that the last film I saw at the old Embassy was “Night of Dark Shadows,” the second theatrical feature based on the cult favorite ABC-TV horror soap opera, and I believe that was in the summer of 1971.

Quite often after seeing films at the old Embassy Theater (which in those days included a second feature & usually Three Stooges' or cartoon shorts, all for the vast sum of $0.50-to-$0.75 cents), my family &/or friends would head over to the old Liggett’s Drug Store, located kitty-corner to the Embassy and parallel to the Grover Cronin’s block, on the corner or Moody & Crescent Streets, for more refreshments if the then-inexpensive candy, popcorn & soda at the Embassy hadn’t been enough!

Liggett’s, which sported one of those familiar “Rexall Drugs” signs on the outside, on the inside had a great, old-fashioned soda fountain, adjacent to its pharmacy and retail area; in the back of the counter seating area were two phone booths—the kind with wooden-encased glass doors & seats inside for comfort & privacy in conducting private telephone conversations—a concept foreign to the cell phone chatterers of today!

Then, maybe after a quick bite to eat at Liggett’s after the film at the Embassy (and a phone call home to see what time to be home for supper), maybe it was across the street and up the block to Discland, to browse for the latest Beatles, Herman’s Hermits or Motown singles. As far as I know, Discland was still in operation as of sometime in the 1990s, though it had bounced around to various locations within that few-blocks radius on Moody Street.

Truly, those WERE the days!

I grew up in a small town that abutted Waltham that didn’t have a movie theatre, so, as kids, we either attended a movie on a family outing, or my sister and I would be dropped off at the Embassy Theatre on Moody Street by our parents to see a movie. I remember the old Embassy Theatre as being very authentic and baroque-looking inside. It was cool—a real movie palace, with a balcony, yet. Among the movies we saw there were “The Disorderly Orderly”, the original “Casino Royale”, and many others. However, the last movie that I went to there was back in 1970, when they showed “From Montgomery to Memphis”. After that, I never went to the Embassy again, at least in part, because I had moved away from home.