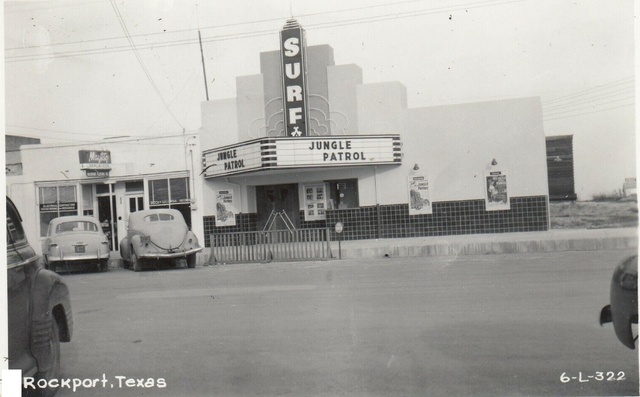 The Rio Theater opened in August 1934. It was renamed Surf Theater in 1949, and it continued operating until at least 1954.

Appears to be, Comfort of Home, a Furniture Store.

Not exactly sure of the dates, or when it changed names??

The Rio became the Surf in 1949. The March 12 issue of Boxoffice reported the reopening of the house under its new name. The theater had been remodeled by its owner/operator since at least 1943, Ed Barnard. Barnard operated the Surf Theatre at least as late as 1954, when he was mentioned in the May 8 issue of Boxoffice.

The Rio had been remodeled previously, when it was given a new stucco front in 1939, as reported in Boxoffice of May 13 that year. The owner at that time was not named.

Boxoffice of May 29, 1937, reported that Southwestern Theatre Equipment Company had sold a motor to the Rio Theatre at Rockport. The August 7 issue said that the Dallas branch of National Theatre Supply had recently sold the Rio complete projection equipment.

In 1930 a theater at Rockport, Texas, was being operated by W.H. Smith. Motion Picture Times of March 18 that year reported that Smith had renamed his theater the Peoples. The previous name was not mentioned. I’ve found no mentions of theaters in Rockport between then and 1937.

Interestingly, Rockport, Indiana, also had a theater called the Rio, previously called the Alhambra, operating from 1939 until at least 1961. Its frequent appearance in Boxoffice made researching the Texas Rio rather frustrating.

From 1952 a photo of the Surf Theater and Austin Street in Rockport.

How do we get a page for the Cove Drive-in in Rockport?

Jul 18, 1953 Billboard says…. “Cove Drive-in has been opened by Ed Bernard at Rockport, Tex., where he also owns the Surf Theater……”

April 30, 1955 Billboard magazine says…“CinemaScope has been installed at the Cove Drive-in at Rockport, Tex., according to owner Ed Bernard…”

New York Times Sep 12, 1961 Hurricane Carla…“Downtown Rockport, a town of 3,000 near Corpus Christi, was swamped with two feet of water. A drive-in theater was blown away.”

The Google photo shown is not the right location. The theatre was actually 3 or 4 blocks south of where the Comforts of Home store is now located. It was on the east side of Austin Street, between St. Mary’s Street and Market Street. The site is now empty, but the tiny building next to it is still there, functioning as a barber shop.

As for Yakima1’s question, I will soon be submitting a timeline and other info for the Cove Drive-In Theatre in Rockport.